Help Us Iowa: You’re Our Only Hope (on Marijuana and Preventing a President Trump) 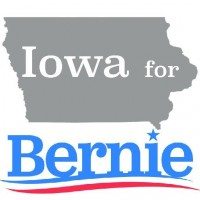 Iowa Democratic caucus voters have a huge burden on their shoulders as they decide who they will caucus for on Monday. Will they choose Bernie Sanders’ hopeful message of change or Hillary Clinton’s pragmatic realism (or is it political cynicism)? Iowa chose change in 2004, and despite the many unfulfilled promises of the Obama campaign, I urge Iowa voters to choose change again and caucus for Bernie Sanders, who has been surging in the polls, but it is looking too close to call at the moment Yes, Bernie is better on marijuana, but he also is the candidate we need to curtail the massive influence of corporate interests and to topple the political monster that is Donald Trump.

I love Bernie Sanders’ Drug War policies, but I don’t know of anyone that votes on just one issue.  Hell, if I only looked at marijuana legalization, there is reason to believe that Donald Trump could even be better on the issue than Hillary Clinton, but I want nothing to do with Donald Trump as leader of the free world.

Of course, Senator Sanders is the best mainstream candidate on drug policy as he has spoken a lot about the need to reform our drug laws and has even introduced a bill that would de-schedule marijuana from the list of controlled substances, effectively ending the federal marijuana prohibition. Sanders has also introduced legislation that would eliminate private federal prisons as it is obscene that big businesses would be able to profit off of locking up nonviolent drug offenders.

Hillary Clinton likely won’t be terrible on marijuana and it is safe to assume that she would continue the very pragmatic approach followed by President Obama. However, it is clear that Clinton won’t advocate for legalizing marijuana. While she supports moving marijuana from Schedule I to Schedule II, that is merely an incremental step and is a much more tepid move than what a majority of Americans want (and a super majority of the Democratic Party supports).

It is clear that Bernie Sanders is a more progressive candidate on limiting the perverse influence of money over our political system. Hillary Clinton is simply too beholden to many wealthy donors, from Goldman Sachs to the many rich folks forking out the maximum $2,700 donation to her campaign to those funneling in dark money into her Super PAC (run by the despicable David Brock). No matter the issue most important to you, the influence of money hurts your cause (unless your cause is to perpetuate income inequality and advance the financial power of the 1%).

An Anni Karni Politico story out today discusses how many big Clinton backers would be willing to support a Michael Bloomberg independent campaign over Sanders if he bests Clinton for the Democratic nomination:

That her supporters see themselves more in line with a billionaire independent puts Clinton in a tight spot — those backers are important allies for Clinton, many of them longtime personal friends. But as textbook one-percenters, they are potentially political poison in Iowa, where Sanders’ most potent line of attack on Clinton has been highlighting her paid speeches in front of Goldman Sachs, and her personal connections to Wall Street.

On Wednesday night, Sanders criticized Clinton for leaving town to attend a fundraiser at Franklin Square Capital Partners in Philadelphia.

“My opponent is not in Iowa tonight,” he pointed out, drawing loud boos from the crowd. “She is raising money from a Philadelphia investment firm. Frankly, I’d rather be here with you.” On Thursday, he released a new ad attacking Goldman Sachs for injecting “millions in campaign contributions and speaking fees” into politics.

The fact that Hillary Clinton would attend a fundraiser with a financial investment firm just a few days before the Iowa caucus really brings home why Senator Sanders should be the nominee. Whether you believe that Clinton is too beholden to rich donors or not, leaving Iowa to attend a lavish fundraiser hosted by Franklin Square Capital Partners, a $17 billion investment fund, is just terrible politics. Which leads us to the real reason that Iowa Democrats should support Senator Sanders over Hillary Clinton: Clinton could very likely lose the general election to Donald Trump.

Clinton’s scandals could give us President Donald J. Trump

This year, Americans are craving some authenticity and a candidate that isn’t controlled by corporate special interests. In 2016, voters are tired as politics as usual and Hillary Clinton is politics as usual and Trump will call her on it again and again. I wish that I couldn’t foresee Donald Trump beating Hillary Clinton in Florida, Ohio and Missouri and winning the Electoral College (even if he doesn’t win the popular vote), but I certainly do.

Clinton’s scandals, both past and present and of her own doing and her husband’s, will be brought up again and again by Donald Trump. Most candidates wouldn’t bring up Juanita Broaddrick in a debate with Hillary Clinton, but Trump will. And Monica Lewinsky, Kathleen Wiley and Gennifer Flowers. And the $850,000 payout to Paula Jones. Of course, Hillary shouldn’t have to pay for Bill’s transgressions, but these scandals could very well cut into her strength as a defender of women.

I hope Bill Clinton starts talking about women’s issues so that voters can see what a hypocrite he is and how Hillary abused those women!

Like Bernie, we are all sick and tired of hearing about Hillary Clinton’s damn emails, the scandal keeps on going and going and keeps looking worse and worse, with 22 emails on her private server deemed “top secret” and the State Department delaying the release of the final batch of emails. It is certainly safe to assume that, at best, the final batch of emails will cause more political headaches for Clinton. At worst, Hillary Clinton could get indicted.

While I have a hard time seeing the Obama Justice Department prosecuting Hillary Clinton, I can envision someone on her staff being prosecuted, and that being enough to tip the scales towards a President Donald J. Trump administration. (I shudder as I type those words.) Most of the polls show that Bernie Sanders beats Trump by bigger margins than Clinton, and I’m not surprised considering the mood of the country.

Senator Sanders cannot be tied to any corporate overlord or political scandal. Like Trump, Sanders is seen as being authentic, but unlike Trump he has had a solid set of beliefs for decades, not flip-flopping on virtually every major social issue in an obvious attempt to win political points with primary voters.

The conventional wisdom has been that Hillary Clinton, scandals and all, is the better general election candidate, but this isn’t a conventional campaign; otherwise, we wouldn’t even be thinking about Donald Trump as the GOP nominee. As much as I support legalizing marijuana, the number one reason that I support Bernie Sanders is because he can beat the billionaire bully head-to-head. Senator Sanders likely cannot win the Democratic nomination without winning Iowa. Help us Iowa caucus voters: you’re our only hope.