An Extraordinary “Path to Marijuana Reform” by Two Oregon Congressmen 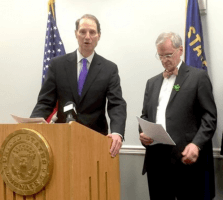 Two Oregon congressional democrats, a senator and a representative, show ground-breaking leadership with their “Path to Marijuana Reform.”  Three pieces of excellent legislation showcase the effort by Senator Ron Wyden and Representative Earl Blumenauer. This proposal has excellent cannabis policy goals. It would:

This is the biggest and best cannabis reform ever to be introduced to the US Congress. Bernie Sanders tried to deschedule cannabis in the Senate last term, but got no cosponsors.

Oregon is blessed with some of the very finest in congress. Ron Wyden is the powerful Senate Finance Committee Ranking Member. Earl Blumenauer has consistently stood with cannabis law reform and helped create and pass some of the first true national legislation protecting Americans in legal states. Both patriots work for the rights of Oregon voters and the civil and health rights of all Americans.