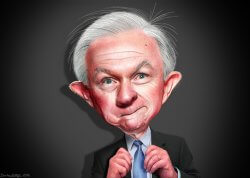 Next Attorney General Jeff Sessions appears ready, willing and able to plunge into a new federal war on marijuana. Asset forfeiture will very likely be one of the top law enforcement official’s key weapons in his forthcoming assault on state-legal, federally-illegal marijuana, its consumers, and its burgeoning businesses.

Sessions’ views on marijuana are severe. From the viewpoint of cannabis law reformers, he is the worst choice possible for Attorney General. His testimony during confirmation hearing indeed confirmed that he will be enforcing federal marijuana law. He testified:

One obvious concern is that Congress has made the possession of marijuana in every state an illegal act. If that is not desired any longer, Congress should pass a law to change it. It’s not the attorney general’s job to decide which laws to enforce. We should enforce the laws as effectively as we are able.

Regarding the Cole memo, the document that has kept the salivating DEA and US Attorneys on leash during the latter part of the Obama administration, Sessions declared:

For those hoping that President Trump’s more moderate views will blunt Sessions’ desire to crush all things marijuana, the Alabaman’s testimony was discouraging. He directly stated that his own views would prevail at the Justice Department. He also whined about lack of resources being the main impediment to more prosecution (actually persecution) of marijuana, its users, and its entrepreneurs.

By this line of reasoning, if the Justice Department and DEA were given sufficient resources, they could prosecute and jail all cannabis users. Actually, congress has been throwing ever more billions at the DEA and into the war on marijuana over the last 45 years, so any complaints about resources are ludicrous. Besides, Sessions already has all the resources he needs to crush state legalizations and cannabis commerce.

Among the many huge powers Sessions enjoys as Attorney General, he inherits potent weapons against marijuana. As head of the Department of Justice, Sessions has 94 US Attorneys at his beck and call. He was, of course, a US Attorney himself from 1981 until 1993, key years of the Reagan war on drugs hysteria. His favorite targets were drug prosecutions, which he gleefully undertook at twice the rate of other prosecutors. Being a Schedule I Drug, cannabis is among the most federally illegal of all substances, with huge penalties already in place for its mere possession. Session’s marijuana target is perfectly vulnerable to him with harsh laws, penalties, and seizures in place.

Perhaps the most powerful of all Sessions’ weapons against marijuana is asset forfeiture. Sessions’ anticipated great expansion of forfeiture, so at odds with public opinion, was, of course, unchallenged during the hearings. Americans are sharply negative on civil asset forfeiture. Pathetically, the only mention of Sessions’ forfeiture boosterism came not as criticism, but as high praise from, wait for it, The Fraternal Order of the Police. Sessions was praised by the police union head for pushing “equitable sharing” a process that allows police to keep the assets stolen from the people they are supposedly serving.

AG Jeff Sessions a huge fan of asset forfeiture. His eagerness to pilfer funds from his fellow Americans through seizure has been well documented, perhaps best by George Leef in the Forbes Magazine opinion, Sessions Has No Problem With Civil Asset Forfeiture — And That’s A Problem. Civil (as opposed to criminal) asset forfeiture requires no conviction, nor even a criminal charge, of the person whose property is being taken by the government. If, in the judgment of the seizing police agency, the property was used in a crime or is proceeds of a crime it may be seized.

Many states, sickened by the spectacle of the looting of citizen property by the government, have placed limits on civil asset forfeiture. But police task forces have been able to circumvent these state restrictions and work directly with the feds. The Wall Street Journal recently opined:

The all-too-common practice allows law enforcement to take private property without due process and has become a cash cow for state and local police and prosecutors. Under a federal program called “equitable sharing,” local law enforcement can team up with federal authorities to seize property in exchange for 80% of the proceeds.
Assets are often seized—and never returned—without any judicial process or court supervision. Unlike criminal forfeiture, civil forfeiture doesn’t require a criminal conviction or even charges…. Civil-rights activists have campaigned for years to end forfeiture abuses. But in a 2015 hearing before the Senate Judiciary Committee, Mr. Sessions defended the practice.

Such seizures no only trespass on state’s rights, they trample property rights, and crush civil rights.

Civil asset forfeiture doesn’t just harm innocent people. It also creates incentives that distort the efforts of police departments away from preventing and solving the worst crimes and toward finding the most lucrative pieces of property to seize.