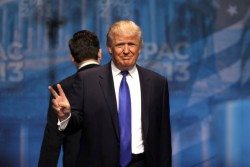 Candidates vying for the presidency diverged this week quite a bit, with Bernie Sanders on one end, supporting the descheduling of marijuana as a controlled substance, effectively ending federal cannabis prohibition and Republicans Chris Christie, Marco Rubio, Carly Fiorina, John Kasich and Ben Carson seemingly on the other end, wanting to continue federal prohibition. Ben Carson even stated that he wanted to “intensify” the failed War on Drugs. Somewhere in between Sanders and the prohibitionist Republicans are Rand Paul, relatively close to Sanders on the issue, and Hillary Clinton and Donald Trump. Clinton and Trump have both stated their support for medical marijuana and basically adhere to a states’ rights issue.

Clinton stated that she was a medical cannabis supporter, but was unwilling to state her support for legalization at this time, wanting to wait for more data out of states like Colorado, at the first Democratic presidential debate. Trump had alluded to his states’ rights position on cannabis at the Conservative Political Action Conference and he clarified that position at a recent campaign rally. The Washington Post reports:

Donald Trump softened his tone on marijuana legalization on Thursday, saying at a political rally that states should be allowed to legalize marijuana if they chose to do so. Trump reaffirmed that he supports making medical marijuana available to patients who are very sick.

“In terms of marijuana and legalization, I think that should be a state issue, state-by-state,” Trump said while taking a handful of questions during a political rally at a casino outside Reno on Thursday afternoon.

His comments came hours after the third Republican debate was held in Colorado, which legalized marijuana for recreational use in 2012. That same day, Democratic presidential hopeful Bernie Sanders said he wants to remove marijuana from the federal government’s list of most dangerous outlawed drugs, which would make it easier for states to legalize it.

Whether you like Donald Trump or not, and I will admit that I won’t be voting for him, it is a good sign that the Republican front-runner has stated his support for leaving marijuana a state issue. Ben Carson, John Kasich, Marco Rubio or Chris Christie would be disasters for the cannabis community and the country, as our federal government would needlessly waste resources and ruin lives exacerbating a failed war that has gone on for far too long.