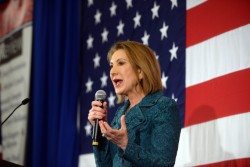 Carly Fiorina made waves at the last Republican presidential debate when she delved into the marijuana policy debate by bringing up the relative danger between cannabis and beer as well as the tragic death of her step-daughter due to drug abuse. Fiorina, who many pundits feel won the 2nd GOP debate, was taken to task by cannabis law reformers including Marijuana Politics’ Russ Belville, who blogged:

It is terribly sad when a parent loses a child for any reason, much less the preventable tragedy of drug overdose, Ms. Fiorina.

But marijuana did not kill your step-daughter. According to the account in your book, Lori Fiorina struggled with alcohol and prescription pills, as well as the eating disorder bulimia.

You are misleading young people, ma’am, when you equate your step-daughter’s death from highly addictive substances and mental illness to an herb that is incapable of producing fatal overdose, even in the tiny minority of its consumers who develop psychological dependence on it.

Yes, let’s tell the young people the truth: it is misleading to tell them marijuana is just like having a beer, because it is far less dangerous than that. Objectively, Ms. Fiorina, in every measure, marijuana is safer than alcohol. You cannot continue to peddle this reefer madness hysteria in the age of Google and expect to maintain credibility with young people.

As Russ notes, Fiorina attempted to mislead the American people with two rather reckless false statements – that alcohol is safer than marijuana and that marijuana is a gateway drug that led to her daughter’s death. Unfortunately, Fiorina added yet another dangerous statement last Friday, at an Iowa voter forum. Shelly Van Winkle, a a Gulf War veteran and a nurse, asked the former Hewlett-Packard CEO what she would do to make it easier for qualified patients — like veterans battling post-traumatic stress, and children suffering from cancer — to access medicinal cannabis. Think Progress covered the back-and-forth:

“You’re not going to like my answer,” Fiorina responded before hearkening back to her breast cancer diagnosis in 2009. At the time, she recounted, her doctor asked “if I was interested in medicinal marijuana.”

Fiorina paused. “So I will also tell you something else. We lost a daughter to addiction,” Fiorina said, before recounting the death of her daughter due to drug and alcohol abuse.

As many of us feared, Carly Fiorina, who had been rather sensible on cannabis policy, seems to have doubled down on Reefer Madness rhetoric, that is contrary to her previous public positions, as she has seen her polling numbers rise after the last GOP debate. Dangerously, Fiorina has now implied that alcohol is safer than marijuana; that cannabis somehow contributed to her daughter’s addiction issues and unfortunate death; and that cancer patients, battling through chemotherapy, couldn’t gain any benefit from utilizing cannabis.

While stating that patients shouldn’t rely upon cannabis alone, the American Cancer Society notes that some patients can indeed benefit from cannabis:

A number of small studies of smoked marijuana found that it can be helpful in treating nausea and vomiting from cancer chemotherapy.

A few studies have found that inhaled (smoked or vaporized) marijuana can be helpful treatment of neuropathic pain(pain caused by damaged nerves).

When pressed on the changing science, politics and cultural shifts on cannabis, it appears that Fiorina will fall back upon the heartbreaking story of her step-daughter’s death, an emotional personal story that can be hard to combat at any time, particularly on a debate stage live on national television. No one wants to seem uncaring, but it is important that we base our drug policies on science and fact and not on emotion.

While most experts, pundits and casual political observers will agree, Carly Fiorina has a very slim chance of becoming the next president of the United States. Thus, we will inevitably receive comments and emails about why are we even wasting our time covering Fiorina’s positions on cannabis. Well, Fiorina could certainly be the vice-presidential pick of the GOP nominee as she has proven her debate chops and national standing, not to mention the fact that the Republican Party may be inclined an attempt to increase its standing among women (although that didn’t work so well with the ill-fated nomination of Sarah Palin).

Carly Fiorina’s marijuana rhetoric is dangerous both culturally and politically. Culturally, her positions basically favor alcohol and pharmaceutical narcotics over cannabis. By every measure, alcohol and narcotics, such as OxyContin, are more deadly than cannabis. It is reckless to push people into using drugs than can actually cause a fatal overdose over at least trying a substance that won’t cause an overdose death.

Fiorina’s recent statements may have a detrimental impact in the growing number of states looking to legalize cannabis over the next few years, both for medical purposes and adult-use. The key voting bloc on marijuana tends to be so-called “soccer mom” vote. Marijuana legalization is usually favored by a majority of men, while women tend to be a bit more skeptical.

The soccer mom vote becomes key because these moms tend to be progressive on other issues, such as marriage equality and protecting the environment, so they are a natural political ally. But these soccer moms, many of whom may have used marijuana in college, may feel conflicted about legalizing marijuana now that they have children. Trotting out outdated fears about the Gateway Theory or about how dangerous today’s marijuana is, may sway moms who don’t have the time to research the fact that these Reefer Madness positions have been debunked. Throw in Carly Fiorina’s false contention that cancer patients can’t benefit from cannabis, then many moms, who will sympathize with Fiorina’s personal story, may just conclude that don’t support medical cannabis as well.

A sincere and heartfelt thanks to Shelly Van Winkle, someone who has risked her life for this country and is brave enough to take on the rising GOP political star. It is imperative that cannabis law reformers and everyone that supports policies based upon science to challenge the Reefer Madness rhetoric of all of the 2016 candidates. Rand Paul is the reasonable voice on the Republican stage, but he can’t do it alone. We must continue to discredit the false statements and bad policy positions that have since been espoused by Carly Fiorina, Chris Christie and Marco Rubio.

We have made too much progress towards sensible cannabis policies to allow for dangerous Reefer Madness rhetoric to stop the implementation of policies that will remove marijuana from the unregulated, criminal system into one where we can protect patients and better prioritize our limited resources towards treatment and prevention instead of wasting taxpayer dollars on mass incarceration.