John Kasich: Right on So Many Issues, Wrong on Marijuana 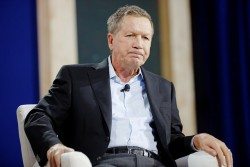 Last month Ohio Governor John Kasich debated his way into the mainstream spotlight at the first official Republican presidential showdown. In a sea of prototypical GOP voices attempting to out-Trump The Donald, his reasonable and measured demeanor stuck out like a pair of cuffed skinny jeans paired with a man-purse at the Iowa State Fair. While everybody else was talking about defunding Obamacare and forcibly removing Mexican migrants, Kasich was touting his state’s $2.6 billion dollar Medicaid expansion by way of Affordable Care Act dollars as an example of compassionate conservatism with echoes of Ronald Reagan. With calm passion he managed to make every on-stage rival look like a heartless buffoon with poor knowledge of history. Here’s his answer to a question about the Medicaid expansion from moderator Megyn Kelly:

“First of all, Megyn, you should know that President Reagan expanded Medicaid three or four times. Secondly, I had an opportunity to bring resources back to Ohio to do what? To treat the mentally ill. 10,000 of them sit in our prisons. It costs $22,500 a year to keep them in prison; I’d rather get them their medication so they can lead a decent life. Secondly [sic], we are rehabbing the drug addicted. 80% of the people in our prisons have addiction-problems. We now treat them in the prisons, release them in the community, and the recidivism rate is 10%. And everybody across this country knows that the tsunami of drugs is threatening their very families. So, we’re treating them and getting them on their feet. And, finally, the working poor: Instead of having them come into the emergency rooms where it costs more, where they’re sicker, and we end up paying, we brought a program in here to make sure that people can get on their feet. And you know what? Everybody has a right to their god-given purpose. and finally our medicaid is growing at one of the lowest rates in the country.”

With mental health, social welfare, criminal justice reform, drug addiction, health care, and even God thrown in the mix, Kasich was definitely pushing all of the right buttons for centrist, socially progressive-minded Republicans (if such a beast is still in existence). And liberals watching the debate loved him too. But at a time when the GOP grassroots seems intent on voting in the exact opposite of a compassionate conservative, the overall Republican response was cool. He’s currently sitting at 6% in the national polls–tied exactly with Ted Cruz, though statistically (and optimistically) with Jeb Bush if you take into account the 4 point margin of error.

Bizarrely, Kasich’s views on marijuana don’t seem to mesh with his reform-minded statements and legislative record. In fact, he seems completely blind to the direct correlation between harsh drug laws and mass incarceration. Despite the fact that he signed a progressive prison reform bill and made it easier for released felons to get jobs, and the fact that more than a quarter of those jailed in Ohio this year were imprisoned for drug crimes, Kasich has been outspoken in his unshakable opposition to cannabis decriminalization. Earlier this week, in an interview with MLive, he said legalization is a “terrible idea,” and “sends mixes messages to young people about drugs,” because it gives the impression that “some drugs are okay but others aren’t,” and “Why don’t we just say don’t do drugs, period.”

Earlier this year, in an interview with conservative radio host Hugh Hewitt, Kasich made similar statements, equating cannabis to heroin and saying that all illicit drugs are “a scourge in this country.”

Despite that fundamental misunderstanding of cannabis and drug reform, Kasich takes a more nuanced view of other states’ legalization experiments. He has been outspoken in his opposition to his home state’s recreational bill that will go before voters this November, but sees the issue through a states’ rights lens and is, in that regard, more in line with rivals Ted Cruz, Carly Fiorina, and Rand Paul who have promised a “hands-off” approach if elected in 2016. Speaking with MLive, in comments that echoed those made to Hewitt, Kasich said he most likely wouldn’t interfere:

“I would try to discourage the states from doing it. Hopefully we’ll defeat it in Michigan and Ohio, but if states want to do it … I haven’t made a final decision, but I would be tempted to say I don’t think we can go and start disrupting what they’ve decided.”

John Kasich has fashioned himself as a compassionate conservative carrying Ronald Reagan’s mantle in expanding Medicaid, and is in many ways more progressive than any other GOP candidate running, especially when it comes to prison reform and social justice. Unfortunately Kasich’s views on marijuana legalization echo the Reagan presidency which saw the dawn of mandatory minimum drug sentencing and the devastation of entire communities due to unfair and immoral profiling and policing. The fact that Kasich is unable to recognize the chasm between his views on drugs and his views on social welfare is indicative of either poor judgment or cognitive dissonance. The good news is that there’s plenty of room to grow–in both perspective and poll numbers.