“We Have Got to End the War on Drugs,” Bernie Sanders on Jimmy Kimmel Live 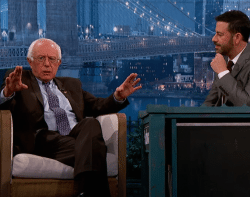 Bernie Sanders has gotten rave reviews from marijuana law reform advocates and Drug War reformers with his policy proposals and comments. The Marijuana Policy Project gives Bernie Sanders an “A” rating, while we here at Marijuana Politics give the Vermont Senator an “A-” on his cannabis policy. Once Sanders gives his full endorsement for ending federal cannabis prohibition, he’ll get a full “A” from us, but in the meantime, we can’t help but be extremely pleased by a serious presidential candidate that has stated that he would be inclined to vote for marijuana legalization at the state level and that states should be able to legalize marijuana without restrictions from the federal government.

In addition to being open to positive marijuana law reforms, Sanders has been open about how the Drug War has failed and he has introduced important legislation to end the private prison racket. It shouldn’t be surprising that Sanders is on the right side of history when it comes to the Drug War, since he stated his opposition to the harmful war about four decades ago (in addition to being on the right side of marriage equality and many other issues.)

Sanders has never shied away from staying true to himself, regardless of the political consequences. Still, it was so refreshing to hear a serious presidential candidate unequivocally state that, “We have got to end the War on Drugs,” on a network talk show. While laughing at first when asked by Jimmy Kimmel about his stance on marijuana, the Vermont Senator talks about how marijuana legalization and the Drug War are serious issues because of our mass incarceration problem and the many lives unnecessarily ruined. Here’s the video:

Win or lose, Bernie Sanders has done amazing work for cannabis legalization and Drug War reform. He has demonstrated that being sensible on drug policy and marijuana law can be good politics. Hopefully, the next United States administration, whether it is a Sanders administration or not, will work will work with the newly-elected Liberal Party in Canada to help improve drug laws globally, starting with marijuana legalization.