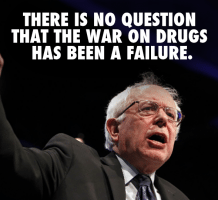 Millions of Americans tuned into the Democratic presidential debate tonight to hear about the major issues facing our nation. Cannabis law reformers were waiting for the Democrats to discuss marijuana legalization and Anderson Cooper even teased the cannabis question over a commercial break, stating that, “Some of the candidates have tried marijuana, as has probably everybody in this room.”

Bustle added some flair to Cooper’s statement on Twitter:

“Some of the candidates have tried marijuana, as has probably everybody in this room.” – Anderson Cooper #DemDebate pic.twitter.com/YZb8XgRWMo

Bernie Sanders was asked whether he would vote for marijuana legalization if he were a Nevada resident and the insurgent candidate didn’t disappoint the Drug War reformers that have flocked to his campaign. “I would vote yes because I am seeing in this country, too many lives being destroyed for nonviolent offenses. We have a criminal justice system that lets CEOs on Wall Street walk away and yet we are imprisoning or giving jail sentences to young people for smoking marijuana. I think we have to think through this War on Drugs which has done an enormous amount of damage. We need to rethink our criminal justice system and we have a lot of work to do in that area.”

Hillary Clinton was then asked whether she was ready to take a position on marijuana legalization tonight and the former Secretary of State answered emphatically, “No.” Clinton did go on to discuss her support for medical marijuana and the need to reform our criminal justice system. Unfortunately, none of the other candidates, Jim Webb, Lincoln Chafee, or Martin O’Malley, were asked about marijuana, as I tweeted at the time:

Disappointed only @BernieSanders & @HillaryClinton were asked about #marijuana. Are the other candidates just blocks of granite? #DemDebate — Anthony Johnson (@anthonyj1977) October 14, 2015

Marijuana legalization, the greater Drug War, civil liberties and criminal justice reform were all discussed in the first debate and will continue to be major issues brought before the Democratic candidates in future debates. Bernie Sanders made reforming our criminal justice system a foundation of his campaign tonight, mentioning the issue several times. It will be interesting to see how voters react to the candidates’ stances tonight and how they handle these important issues in future debates.