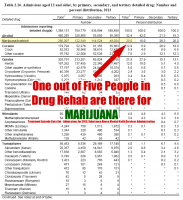 As a regular segment on my live weekday marijuana news/talk-radio program on CannabisRadio.com, I dig deep into the Drug War Data Mines to find the surveys, polls, studies, and statistics to help you make the case to end adult marijuana prohibition nationwide. Here are the ten most important marijuana data topics I’ve covered in 2015:

1 in 5 Coloradoans Tried Legal Marijuana Last Year [2015-02-24 Tue] – 2015 marked the first year we could see a full year’s worth of data coming in from the first two states to legalize marijuana. Figures from Colorado show that despite almost 1 out of 5 Coloradoans having tried legal pot, the sky did not fall.

Washington State Healthy Youth Survey 2014 Data on Marijuana [2015-03-12 Thu] – One of the only two scary talking points the opposition to marijuana legalization has is “WATC” – What About The Children? In this state survey from Washington, we find out that legalizing marijuana hasn’t had much effect on the kids whatsoever. After all, kids have always had their access to marijuana.

Gallup Poll Shows 1 in 9 Adults Smoke Pot [2015-07-22 Wed] – For the third straight poll, Gallup showed majority support for marijuana legalization at 58 percent. Here we learn that far more people are smoking pot than the opponents of legalization want to admit.

The Data from One Year of Marijuana Legalization [2015-07-28 Tue] – Drug Policy Alliance did a remarkable job compiling all the relevant data from Colorado and Washington a full year into their retail sales of marijuana and found that nothing much has changed except raising $200 million in tax revenue.

How Much Does Marijuana Contribute to California Drought, Really [2015-08-11 Tue] – As California was gripped by record drought for the fourth year straight, mainstream publications lamented how much water pot plants use, ignoring how much more water things like almonds use.

FARS Data Shows Much Safer Roads In MedMJ Era [2015-09-24 Thu] – The Fatality Analysis Reporting System, from the National Highway Traffic Safety Administration, punctures the other scary talking point of prohibitionists, “SMOF” – Stoned Mayhem On Freeways – by showing how fatalities are at or near record lows, even in marijuana states.

Drug Testing for Welfare, A Cruel Waste [2015-10-09 Fri] – Republicans and some Democrats in statehouses nationwide have decided to drug test poor people in order to receive welfare benefits, a cruel and counterproductive measure that only harms kids and costs the state more money.

Colorado’s Arrest Rate Has Gone Up, but Reported Crimes Have Gone Down [2015-12-03 Thu] – Debunking a prohibitionist who tries to conflate more arrests in Colorado with more crime, when, actually, reported crime has gone down. It’s almost as if not chasing potheads has freed up cops to chase real criminals.

1 in 5 Drug Rehab Beds Is Occupied By a Pot Smoker [2015-12-11 Fri] – The Treatment Episode Data Set – Admissions shows that over half the people in rehab for marijuana alone are forced there by the criminal justice system, thus taking up almost 20 percent of all rehab space.