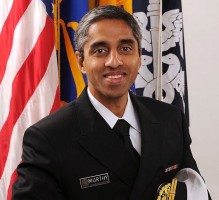 “We have some preliminary data showing that for certain medical conditions and symptoms, that marijuana can be helpful,” United States Surgeon General Vivek Murthy told CBS last February “I think that we have to use that data to drive policymaking.” Murthy isn’t the first Surgeon General to express reasonable comments on drug policy as former Surgeon General Joycelyn Elders suggested that the U.S. study drug legalization in 1993 and came out in support of marijuana legalization in 2010. Thanks to pioneers like Elders and others, Murthy is working in a much more palatable political environment and will lead a report “presenting the state of the science on substance use, addiction and health.”

The report from Vivek Murthy, the nation’s top public health official, will “outline potential future direction” for drug policies and “educate, encourage and call upon all Americans to take action,” according to a Federal Register notice published on Thursday. It will take a comprehensive look at illegal drugs as well as currently legal substances like alcohol and prescription medications.

Under the Obama administration, federal drug agencies have made a point to talk about addiction as a medical problem, but the drug control budget continues to devote far more resources to arrests, punishment and interdiction than to health strategies like treatment and prevention.

If President Obama intends to bring federal drug policies and budgets into line with his administration’s rhetoric before he leaves office, he could hardly find a better or more effective way to do it than through the nation’s top medical doctor.

Drug War reform advocates had hope that Murthy would help implement more sensible drug policies, especially after he made positive comments about medical cannabis last February. However, as Angell notes in his blog post, Murthy seemed to backtrack in follow-up statements. A thorough review of U.S. drug  policy, based upon science could fulfill the promise that Murthy demonstrated when he reasonably stated that cannabis can have medical benefits and that data should determine policy decisions.