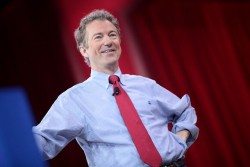 Supporting sensible federal marijuana policies used to one of the third-rail of American politics as politicians fell over each other to be the candidate toughest on crime. Today, a majority of voters support legalization and we are finally seeing a few major presidential candidates support federal marijuana law reform. Thus far, New Jersey Governor Chris Christie seems to be the only potential 2016 presidential candidate taking the hard-line position that the federal government should waste resources trampling the will of voters who have legalized marijuana within their state’s’ borders.

President Obama, pledging to stop federal prosecution of state-legal medical marijuana providers and implementing some positive policy reforms, along with the fact that marijuana legalization is extremely popular with Democrats, has set the stage for all 2016 Democratic candidates to support sensible federal policies. At the moment, Senator Bernie Sanders looks to be the Democratic “cannabis candidate,” hopefully pulling front-runner Hillary Clinton his direction. Gary Johnson and Ron Paul helped set the stage for Senator Rand Paul on the Republican presidential primary stage. Senator Paul has become the go-to Senate Republican on marijuana reform and he will be even accepting campaign contributions from the cannabis industry. From Yahoo:

Sen. Rand Paul, R-Ky., the most vocal critic of the “war on drugs” in the 2016 Republican presidential field, will host a “private briefing” on June 30 for campaign donors on the sidelines of the second annual Cannabis Business Summit and Expo in Denver, according to an invitation for the event obtained by Yahoo News.

It’s not clear whether any of Paul’s rivals for the GOP nomination will associate themselves with the gathering, which is put on by the National Cannabis Industry Association (NCIA). Other headline events at the June 29-July 1 forum include pot-themed sessions called “Running Your Cannabusiness,” “Cultivation and Processing,” “Money Matters,” “Finance, Accounting and Insurance,” and “The Law, Policy and Reform.”

NCIA forwarded its members an invitation from Paul’s campaign for a “VIP reception” at the Colorado Convention Center in Denver. There are three donor levels: $2,700 gets “attendee” status, someone wanting the “sponsor” label has to kick in $5,400, and a “host” must pony up $10,400. Any checks must be payable to “Rand Paul Victory Committee.”

Whether they earn their parties’ nominations or not, Bernie Sanders and Rand Paul will continue the momentum for future marijuana law reform, both at the state and federal level. Each candidate will make it even safer for future presidential candidates to be on the right side of history and plenty of state politicians will endorse the two candidates and speaking favorably of their marijuana law positions. A Bernie Sanders vs. Rand Paul presidential contest would certainly be great for the cannabis community and, unless other candidates move significantly, Sanders and Paul should be the candidates we rally behind.