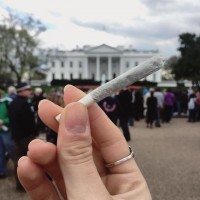 Following through with a protest that has split the cannabis law reform movement, activists marched in Washington, D.C., and, in an act of civil disobedience, smoked marijuana in front of the White House. The smoke-out was supposed to start at 4:20pm Eastern Time, but according to Twitter, protesters may have gotten about a four minute jump on the smoke-out. I got word from activist Adam Eidinger, who led the successful effort to legalize cannabis in Washington, D.C., and was the primary organizer of the protest, that there were two $25 tickets levied at the protest. Eidinger feels that the event was a success and that “a message was sent to the President.”

I previously caught up with Mr. Eidinger, who I respect greatly, on a phone call for a previous blog, where he mentioned that he was inspired by Bill Maher’s call to legalize nationwide and he expounded on why advocates planned the public smoke-out: “We won’t be ignored anymore. I’m not the biggest advocate of public use, but for now, this is a tactic that we need because we have been ignored too long. Frankly, we don’t have anything to lose. President Obama should reschedule immediately to Schedule 3 at the worst and immediately pardon all marijuana growers. All of a sudden Democrats have discovered states’ rights on cannabis laws, but that isn’t good enough, we need legalization across the nation.”

Marijuana Majority’s Tom Angell, another activist that I greatly respect, also gave me his point of view:  “While there’s certainly a role for civil disobedience in social justice movements, you usually protest by committing acts that you think should be legal but aren’t. Allowing the smoking of marijuana in public parks would not be good public policy.”

Shucking aside any criticisms of the public White House smoke-out, activists carried around a 50-foot inflatable joint, urging President Obama to remove marijuana from the list of controlled substances (as a bill filed by Vermont Senator Bernie Sanders would accomplish):

President Obama, while not perfect by any means on marijuana policy and greater criminal justice reform, has made progress on the issues and it does seem that our nation is making great strides in improving the failed and harmful policy of cannabis prohibition. The future of the movement is certainly bright, with more states likely to legalize marijuana in 2016 (and beyond), along with bipartisan momentum generated for national reforms. We shall see whether today’s White House smoke-out helps or hurts the cause, but it is clear that the cannabis community is sick and tired of being treated as 2nd-class citizens and will continue to take the fight for equality to the ballot box, the Halls of Congress and the White House.