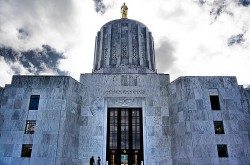 Unfortunately, Senate Bill 964 just passed the Oregon Senate by a vote of 29 to 1. Senator Floyd Prozanksi, the senator with the most expertise on marijuana policy, opposed the measure. While it is disappointing that so many senators voted to deny safe access to sick and disabled patients across the state, we are not done fighting this bill. There is still a good chance that we can get the House to vote against the bill or that it will get squashed in the Ways and Means Committee. We can still protect the Oregon Medical Marijuana Program and the rights of patients by educating Oregon House members about the harmful effects Senate Bill 964 will have on patients and the divisive, secretive manner this bill has proceeded.

Too many patients have already been denied safe access to cannabis as whole swaths of the state have banned medical marijuana dispensaries. Those bans ended on May 1st, but Senate Bill 964 will pull the rug out from under patients and good business people who were waiting for the bans to end. Allowing cities and counties to ban medical dispensaries without a vote of the people not only hurts patients, but violates the opt-out provision just passed by over 56% of voters who supported Measure 91. Senate Bill 964 co-sponsor Jeff Kruse has already made it known that he will attempt to amend Measure 91 to match the SB 964 local ban provision.

Senate Bill 964’s reduction in the number of plants allowed per garden site will lead to at least hundreds, if not thousands, of patients to lose their medical garden and the extra reporting and inspections will only force more people back into the black market. Since Senate Bill 964 co-sponsor Ginny Burdick didn’t allow any public testimony of the bill, some provisions are simply ridiculous or unclear. For instance, the bill changes the definition of a mature marijuana plant to include drying plants. Thus, under Senate Bill 964, drying branches will be counted as plants! Will patients who grow for themselves have to be inspected and report monthly? How will growers that may not be computer literate report?

Fortunately, the Oregon House as at least three representatives standing up for patients and the will of the voters. Representatives Ann Lininger, Peter Buckley and Ken Helm blocked a previous version of Senate Bill 964, but they need our help to stop this bad bill in the House. Contact your Oregon House member and urge them to oppose Senate Bill 964 and to stand with Representatives Lininger, Buckley and Helm. You may want to let your senator know that you are disappointed that they supported Senate Bill 964 and praise Senator Floyd Prozanski for bravely opposing the bill when the rest of his Senate colleagues betrayed patients and the will of the people.

In addition to your legislator, email and call some key House Democrats and let them know that they should oppose Senate Bill 964 and stand with Senator Prozanski and Representatives Lininger, Buckley and Helm:

House Speaker Tina Kotek at 503-986-1200 and Rep.TinaKotek@state.or.us: Speaker Kotek’s Portland district supported Measure 91 with over 78% of the vote.

Representative Lew Frederick at 503-986-1443 and Rep.LewFrederick@state.or.us: Representative Frederick’s Portland district supported Measure 91 with over 82% of the vote.

Representative Rob Nosse at 503-986-1442 and Rep.RobNosse@state.or.us: Representative Nosse’s Portland district supported Measure 91 with just over 85% of the vote, the greatest support of any district.

Patients and the OMMP have been threatened before, and they will unfortunately be threatened again, so we must remain vigilant and strong. While the vote in the Senate didn’t go the way that we wanted, the flaws in the bill and the divisive nature of the process, provide an opportunity to defeat this bill in the House or in the Ways and Means Committee. If we remain strong and spread the word to our friends and families, we can defeat this bill and protect patients and the OMMP.