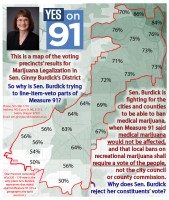 It appears as though some of our elected officials think our petitions and votes aren’t what we want to see written into law. They think our initiatives are merely advice. And like then-Washington Gov. Christine Gregoire in 2011, they are so easily frightened by vague, unrealized federal threats they’re willing to line-item veto the key provisions of sensible marijuana regulation.

And should these politicians succeed, they’ll wreak the same sort of havoc on Oregon’s successful medical marijuana program as we are now seeing wrought upon Washington’s.

That joint committee of five senators and five representatives was well on its way to accomplishing most of the drastic changes to Oregon’s medical marijuana program they sought, including the reduction in medical marijuana gardens from 6 mature plants per patient to a limit of just 12 plants total, regardless of how many patients a grower serves, in urban areas, as well as new recordkeeping and inspection requirements for medical marijuana growers. (Again, despite Measure 91 saying, in effect, “don’t tinker with medical marijuana!”)

But they deadlocked on local medical marijuana bans. When our medical marijuana dispensaries were created by the legislature in 2013, they allowed city councils and county commissions to institute bans until May 1, 2015. Then 146 of 242 cities and 26 of 36 Oregon counties instituted bans.

Now that the ban deadline is up, the question became how can cities and counties maintain those bans? House members wanted such bans to automatically go to the ballot for the voters to decide. Senate members instead wanted bans to remain until the people collected enough signatures to put it to a vote of the people.

The political calculus here is that she thinks she can get a bipartisan Senate majority to support it. Then when it goes to the House, it’s not just Rep. Lininger and four other joint committee members stonewalling it. The full House, she believes, will be swayed by the Senate into supporting the local ban language she favors.

Of course, it strains credulity to think that if the handful of officials running a city or county can vote to ban medical marijuana dispensaries, they won’t demand that power to ban recreational marijuana shops, in contradiction of the clear language of Measure 91 that says only the public vote can institute a ban.

Then we’ll find ourselves in the same morass as Washington State, where medical and recreational marijuana are only available in the urban centers. The price of marijuana will be artificially inflated, especially if the precedent for ignoring Measure 91’s “only the people can ban” language is later applied by the legislature to the “only the state can tax” language, allowing local pot sales taxes. And the reduction in the black market that legalization promised vanishes as it fills the need for patients and consumers in 146 cities and 26 counties, or more!

If Senator Ginny Burdick accomplishes these line-item vetoes regarding local bans and local taxes, she’ll have then defied the intent of fully two-thirds of her district who supported Measure 91.

This isn’t about marijuana. This is about Democracy. Again, I ask, what good is citizen initiative power if the politicians feel they have the right to line-item veto it? What good is voting when a key senator is willing to ignore a supermajority of her own constituents? Please, contact Senator Ginny Burdick and let her know she needs to respect the will of the people.