I was forwarded a letter you had written in response to recent legislative attempts at re-regulating medical marijuana. You open with a condemnation of those who have petitioned you with threats and vulgarity. While I do not fault you for disrespecting those tactics, I would hope you can appreciate the emotion driving those letters and calls. These people are frightened of being subject again to loss of health and liberty. Stress may sometimes lead them to abandon civility, but it does not diminish the validity of their concerns.

What catches my attention is your immediate dismissal of the term cannabis not in favor of the commonly-used marijuana but in favor of the term pot. I understand a need for shorthand, but your particular choice of the word pot, followed by your tale of personal addiction to it (as well as LSD, cocaine, and methamphetamine, I have learned), makes me wonder how much understanding and respect you have for those of us who, unlike you, have managed a healthy and productive lifelong relationship with cannabis. I share much of your background in recovering from the effects of my father’s and my own hard drug and alcohol abuse, but I have found cannabis to be a welcome supplement to my life that has enhanced my being and caused me no pain not related to its prohibition. Your use of the term smoking pot makes me feel as if you minimize the importance of this issue of personal liberty and citizen democracy.

You cite your bouts with addiction as why you are “qualified to be working in this subject area.” It makes me wonder how many of the members of the Oregon Liquor Control Commission are recovering alcoholics and how many members of the Oregon Transportation Safety Department have wrecked their cars? For those of us who’ve studied contemporary drug policy, your background in the addiction recovery community merely certifies that you’ve been exposed to the fatalistic and nonsensical ideas about cannabis that science has disproven; ideas marketed by an industry in desperate need of drug-court-mandated clients with “marijuana addictions” that prove remarkably curable with probationary urine tests and the threat of jail time. 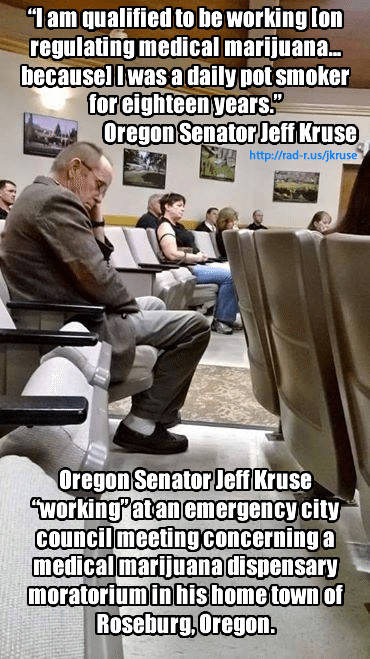 I write in particular to ask you to re-think your rationale for Senate Bill 964, which will, among other things, establish harsh new limits and overbearing regulations on medical marijuana growers and allow localities to maintain existing bans on medical marijuana facilities. You say your support of Senate Bill 964 is based on two primary objectives: protecting “the integrity of the medical program” and attempting “to end the black market sales in Oregon” (an impossibility; there are black markets in cigarettes, DVDs, and purses, for examples.) Please allow me to explain why both of those objectives are not just unrealized, but actively opposed, by Senate Bill 964.

Your defense begins with some back-of-the-envelope calculations about the production level of medical marijuana in Oregon. Here, Senator, I find myself in agreement, in principle, that there is a whole lot of marijuana produced in the state of Oregon. My research has shown that Oregon consistently has the lowest nationwide prices for quality marijuana. Basic economics of supply and demand suggests that there is a great deal of supply here.

The question, however, is just how much of that supply is produced by those growing under the auspices of the medical marijuana program? You make assumptions about “two pounds of pot for each of the 71,000 patients” that have no basis in fact. Many patient just have cards and no grows at all; they use their cards to shop at dispensaries. Some growers produce just a few indoor plants that might produce a half pound. Other outdoor growers may produce massive plants with many pounds. Some crops fail. The truth is, we really don’t know.

Furthermore, estimates about average patient usage are just guesses as well. Frequently cited numbers of grams-per-day ignore the much greater amounts of product needed to produce a gram of tincture, a gram of edible, a gram of concentrate, or a gram of flower. Wouldn’t it make more sense to commission studies or surveys of our medical marijuana program to get some real numbers before we start hacking away at a system that, despite however few may be gaming it, is still serving some of our sickest and most vulnerable citizens?

You are proposing severe cuts because you’re assuming medical marijuana is the root of all marijuana diversions. However, if medical marijuana is just a minority source of diversion, you will have only accomplished eliminating one of the black market’s competitors while harming a vulnerable population in the process without really addressing much of the diversion.

These cuts, you claim, are necessary to fulfill the Cole Memorandum’s directives, which include preventative measures to discourage interstate marijuana trafficking and cover for the marijuana black market. But then you’re proposing to institute a system of onerous inspections and regulations that guarantee that many of these medical marijuana growers – who just want to help sick people, not start a business – will return to that black market. You’re proposing limitations to garden sizes that will guarantee many of these patients – especially the sickest ones with the greatest need – will return to that black market.

Then, in another move counter to the intent of the Cole Memorandum, you are fighting for the maintenance of bans on medical marijuana dispensaries in 146 cities and 26 counties. We may as well call this the Black Market Marijuana Dealer Protection Act of 2015. Nobody can seriously believe that these bans are stopping anyone from using medical marijuana in these localities. Patients are either taking their money out to benefit another city or county, or they’re giving it to their black market source.

Your defense of this local option notion is that a 56 percent statewide vote shouldn’t be binding on the 44 percent in localities who opposed it. You don’t believe that is an “overwhelming majority”, yet in the last election, more Oregonians supported Measure 91 than former Gov. Kitzhaber and Senator Jeff Merkeley. If a barroom brawl was 56 versus 44, those extra dozen fighters on the winning side would sure feel like an overwhelming majority to the losers. What would the majority vote have to be, Senator Kruse, to convince you that the entire state should follow its mandate as written? What’s the point of a statewide initiative system at all, when what you seem to support is the ability of locals who lost to opt out of statewide laws?

Your defense of local option bans makes more sense if you’re defending only the right of localities to remain bigoted against medical marijuana businesses, despite a majority vote of the state. But you’re not in favor of the people in those localities making that decision through the ballot. Rather, you’re supporting the right of the small city councils and county commissions to maintain their bans and forcing the people to have to overturn them. The default position, in your view, is that the Cole-Memorandum-red-flag black-market-subsidy known as a local ban should remain in place until the people vote it out. In your view, the people in a city are subservient to their elected officials, even if the people in the state voted that they shouldn’t be.

Medical marijuana bans should not exist at all. The 1998 initiative that brought us medical marijuana stated that it was to be treated as other medicines. What other medicine in the State of Oregon is subject to a local ban based on the vote of a council or commission? Even alcohol in this state cannot be banned by a locality without the vote of the majority of the people in an election! Why should it be easier for a locality to ban a dispensary than a tavern? Why should any population have the right to vote to make it tougher for sick people to get well?

We must respect the democratic process

Of course, this is only about medical marijuana bans in the short game, right, Senator Kruse? The long game here is to establish the right of these localities to maintain bans on medical so that they can establish that right to ban recreational marijuana, too. It would make no sense to allow a city council to ban a medical dispensary while requiring a vote of the people to ban a recreational pot shop, so there will be a natural inertia to allow the same local power to ban both types of marijuana retailers. Then that local power will be extrapolated to allow cities and counties to establish their own local marijuana taxes, again in contradiction to the text of Measure 91 and again acting as another subsidy to the black market.

The fact is that Measure 91 copied its requirements for a local vote of the people on any bans and the state as sole taxation authority from the state’s liquor laws. The reasons are to help insure as uniform a statewide standard for marijuana as possible, to avoid violating provisions of the Cole Memorandum by promoting black markets. If a local city council or county commission is so sure they’re representing their constituents’ disdain for marijuana businesses, why do they fear putting that issue up for a vote?

Many of you in Salem claim you are frightened by the threat of federal interference, but from our perspective it appears you are more frightened of threats by the lobbyists from the cities and counties. Since so much of what you propose runs counter to the tenets of the Cole Memorandum, this cynicism seems only logical, especially since Oregon has remained remarkably free from federal interference, because our medical marijuana system is more tightly regulated than Washington’s and California’s.

Please respect the democratic process, Senator Kruse. Don’t force the people to pass a constitutional amendment forbidding the legislature from subverting citizen initiatives, as is the law in Washington. Just uphold the law the people of your state voted on.