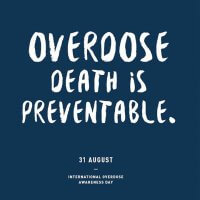 Since today is International Overdose Awareness Day, we wanted to do our part in spreading the word about the important work the Drug Policy Alliance is doing to combat the international epidemic of fatal drug overdoses. The blog below was originally published over at WeedNews.co and is posted here with special permission.

The Drug Policy Alliance has been doing great work to reform drug laws around the world, including cannabis laws, of course. I know firsthand how valuable DPA was to our efforts to legalize cannabis in Oregon and know that they are working extremely hard to pass legalization in California and other states in 2016. While progressive cannabis laws have been shown to reduce the number of opioid overdoses, DPA, led by the great Ethan Nadelmann, are also tackle the broader drug war and are embarking on a comprehensive campaign to prevent overdoses and save lives.

Like too many people, my family has felt the devastating effect of a fatal drug overdose that took the life of a beloved family member at far too young of an age. It is a heartbreak that is unimaginable, especially for parents that have to face life without a child that helped fill their lives with laughter and love. Drug overdoses are preventable and one day, our nation will wise up and treat drug addiction like a health issue instead of a criminal justice issue. So long as drug use is considered criminal, people who need help will remain in the shadows.

The Drug Policy Alliance wants to eliminate the shadows that allow drug overdoses to thrive, all around the globe. While we fight for an end to the prohibitionists policies that fuel the harmful Drug War, there are some common sense policies that can be enacted, such as good samaritan laws and access to naloxone, a drug that can reverse opioid overdoses. No matter your position on drug use, I would hope that we can all come together on this International Overdose Awareness Day, to combat fatal drug overdoses that inflict so much pain on loved ones.

Please add your name to DPA’s petition, and, if you are able, please make a donation:

Accidental overdose deaths are now the leading cause of accidental death in the United States. We must act.

Drug overdose deaths now exceed those attributable to firearms, homicides or HIV/AIDS. Most of these deaths are preventable, but the “tough on crime” rhetoric of the drug war and the stigma associated with drug use have blocked the widespread adoption of life-saving overdose prevention policies like the distribution of the overdose reversal medication naloxone.

Naloxone is an inexpensive, generic drug that works to reverse an opioid overdose by restoring breath to unconscious overdose victims. It has been used with efficacy and safety in emergency rooms and ambulances in the United States for over forty years.

Add your name and join us in the fight to make the overdose reversal drug naloxone more widely available to those that need it.