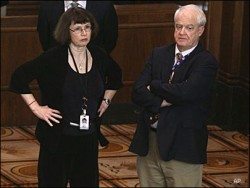 While it is rather unbelievable and infuriating that a handful of Democrats would team up with Republicans to go against the will of the voters and harm sick and disabled patients, we must remain vigilant in doing all that we can to protect our most vulnerable citizens and our vote. Democrats Peter Courtney and Ginny Burdick will likely go down in Oregon cannabis history as the next “Dwight Holtons” as Burdick is up for reelection in 2016 and Courtney in 2018, but first we must stop them from hurting patients and our democratic process. Senator Burdick will be especially vulnerable as her district overwhelmingly voted to support the Measure 91 legalization measure. If you haven’t yet, please read Russ Belville’s excellent blog, “The Arrogance of Oregon Senator Ginny Burdick.”

After patients and advocates rose up to defeat Senate Bill 844 in the Joint Committee on Implementing Measure 91, Senate President Peter Courtney took the rather extraordinary measure of creating a Senate-only M91 Committee after House Democrats Ann Lininger, Peter Buckley and Ken Helm stood up for patients’ safe access and the intent of Oregon voters. Now, Senator Burdick is taking the extreme and radical measure of calling for a vote of Senate Bill 964, without any public testimony. There has been absolutely no public testimony regarding SB 964’s provision that will allow cities and counties to ban medical marijuana dispensaries without a public vote. This is a travesty that goes beyond medical marijuana. This is an attack upon our democratic process itself.

New Approach Oregon, the political action committee responsible for Measure 91, has already sprung to action to protect the will of the voters, so we will be joining forces with their massive campaign email list. Other allied groups will be joining us as well because these radical, undemocratic actions offend people beyond the Oregon cannabis community.

Immediately email the Senate Committee on Implementing Measure 91, urge them to vote “NO” on Senate Bill 964 and demand that they hold a public hearing on this new bill. There are many reasons to oppose this bill and why they should hold a hearing, so please feel free to add your comments, but here are some suggestions:

1. There has NEVER been a public hearing on whether city councils and county commissions should be able to ban medical marijuana dispensaries.

2. Senate Bill 964 will hurt sick and disabled patients. At least hundreds of patients will lose their gardens AND be denied safe access when cities and counties ban medical marijuana dispensaries.

3. Senate Bill 964 will impose too many burdens on medical marijuana providers, pushing them into the recreational market or potentially into the black market. Section 5(1)(a) on page 11 states that the “Oregon Health Authority shall establish by rule a marijuana grow site registration system to track and regulate the production of marijuana”. This could lead to burdensome and intrusive “seed to sale” tracking regulations, invasive camera monitoring and a whole host of new rules that could ridiculously lead to medical marijuana being more strictly regulated than the Measure 91 recreational system.

4. Senate Bill 964 goes against the will of the voters who just passed Measure 91 with more than 56% of the vote. Measure 91 included a public vote opt-out provision supported by Oregonians and medical marijuana shouldn’t be easier to ban than recreational marijuana, something The Oregonian Editorial Board called “nonsensical.”

Simply state what you emailed: Please oppose Senate Bill 964 or at least hold a hearing. This bill hurts patients, goes against the voters’ will and insults our democratic process.

Use your own words, but simply tell them that Democratic Senator Ginny Burdick is making a mockery of the democratic process by denying a hearing on Senate Bill 964. This looks bad for the entire Oregon Democratic Party and that Democrats should oppose this bill, especially if a public hearing isn’t held.

It is a shame that Senator Ginny Burdick is going against her very own constituents, for which she may pay a similar price as Dwight Holton. However, let’s be sure that she doesn’t harm sick and disabled patients and completely trample the democratic process before she gets voted out of office.