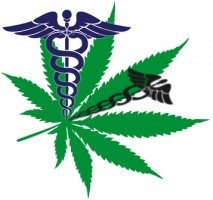 Now that marijuana is becoming re-legalized, expect to see a flurry of new studies showing us some things we’ve always known about cannabis and some things we never would have suspected, like…

Israeli scientists broke some rat bones and then injected them with cannabidiol (CBD). “We found that CBD alone makes bones stronger during healing,” said Dr. Yankel Gabet, one of the lead researchers. “After being treated with CBD, the healed bone will be harder to break in the future.” They also tried injecting the rats with THC + CBD. It didn’t improve the results, but the rats were a lot more mellow about their broken legs.

Cannabis users are less obese and have less diabetes risk

Canadian scientists studied the Inuit, the native people of Nunavik, the northern Arctic province of Canada, and found the marijuana consumers among them had lower body-mass-index measurements, lower body-fat percentages and less insulin resistance. Previous studies have confirmed that correlation between cannabis use and lower insulin resistance, suggesting cannabis could help treat or prevent diabetes.

THC may help prevent the spread of HIV

For seventeen months, Louisiana State University Researcher Dr. Patricia Molina injected THC into monkeys infected with a simian virus similar to HIV. She found that the virus spread slower in those monkeys, corroborating her earlier research showing that THC-treated monkeys had a better survival rate from the simian virus.

Prescription opiate painkiller abuse is described as “an epidemic” by the Centers for Disease Control and Prevention. Overdoses on these drugs like Oxycontin killed 16,000 people in 2013 – more people than were killed in car crashes. Researchers with the National Bureau of Economic Research have found that access to medical marijuana dispensaries (not merely a medical marijuana law) was associated with a 15 to 35 percent decrease in opiate overdose deaths.

Legalizing marijuana’s message to the kids? Don’t use it.