Brazil Supreme Court to Decide if All Drugs Should be Decriminalized 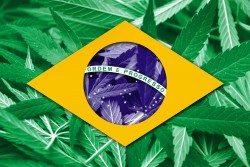 In Ravin v. State, the Alaska Supreme Court determined that the right to privacy under the Alaskan Constitution provided residents the constitutional protection to possess, cultivate and consume personal amounts of cannabis. The Alaskan justices found that the government didn’t prove that the harms of marijuana outweighed the privacy interest of Alaskan residents. The landmark privacy ruling in Ravin didn’t go beyond marijuana, as defendants were unsuccessful with relying upon Ravin to legalize the possession and sale of cocaine for instance. However, the Brazil Supreme Court is currently deciding whether all drugs should be decriminalized. The Intercept’s Glenn Greenwald reports:

The past decade has witnessed a remarkable transformation in the global debate over drug policy. As recently as the mid-2000s, drug legalization or even decriminalization was a fringe idea, something almost no politician would get near. That’s all changed. That the War on Drugs is a fundamental failure is a widely accepted fact among experts and even policymakers. Multiple nations no longer treat personal drug usage as a criminal problem but rather as one of public health. Many of them are actively considering following Portugal’s successful example of decriminalizing all drugs. The global trend is clearly toward abandoning prohibitionist policies.

The rationale most commonly offered for decriminalization is the utilitarian one, i.e. efficacy: that prosecuting and imprisoning drug users produces more harm than good. Also frequently invoked is a claim about justice and morality: that it’s morally wrong to criminally punish someone for what amounts to a health problem (addiction).

By contrast, the Supreme Court of Brazil may be on the verge of adopting a much different and more interesting anti-criminalization justification. The Court is deciding whether the right of privacy, guaranteed by Article 5 of the nation’s constitution (one’s “intimate” and “private life” are “inviolable”), bars the state from punishing adults who decide to consume drugs. In other words, the Court seems prepared to accept the pure civil libertarian argument against criminalizing drugs: namely, independent of outcomes, the state has no legitimate authority to punish adult citizens for the choices they make in their private sphere, provided that those choices do not result in direct harm to others.

With more and more people realizing the harmful consequences of the failed Drug War, Brazil’s Supreme Court has an opportunity to add to the momentum for reform and really light a fire under a global debate. Hopefully, a majority of the justices will understand that the War on Drugs causes more harm than drugs themselves and move forward with decriminalization. With the success in Portugal and advocates in the U.S. and around the world looking to follow Portugal’s model, Brazil’s Supreme Court could start a trend for Drug War reform that looks a lot like the trend in the United States for marijuana legalization, as sensible reforms are passed state by state and country by country.