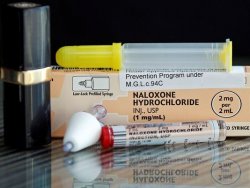 After 45 years of drug war failure, drug addiction and death are at all-time, devastating highs. This new opioid epidemic, clearly a function of Big Pharma’s pill milling and marketing, now kills over 100 Americans each day. In response, Chris Christie’s opioid panel has submitted its conclusions to the president. As predicted here, the commission ignored cannabis solutions and focused on finding a pharmaceutical fix. Part of that fix is increased distribution of Narcan and other opioid blockers.

Increases in overdose deaths have increased with the war on drugs.  New York Times graph.

The basic reason opioids, from oxycodone to heroin to fentanyl are so fatal is that they depress respiration. Overdoses can cause people to stop breathing, resulting in their deaths within minutes. Any combination with alcohol makes it even more deadly. Luckily there is an antidote; if delivered soon enough to the overdosed opioid user, the drug naloxone (Narcan) blocks the body’s opioid receptors from activation by opioids (or endorphins), restoring normal breathing.

So, the good news is that many overdose deaths are being prevented by first-responders equipped with Narcan. Obama era federal legislation mandating wide distribution of Narcan (and other opioid blockers) has saved many lives.

The bad news is the makers of naloxone have responded to this national crisis (and the federal mandate) by jacking up the price of their life-saving product to an obnoxious degree. Essentially, they can name their own price for their drug. They have responded by throwing all morals and ethics to the wind, seeking only to profit, seeming standard practice for the pharmaceutical industry.

US Senator Claire McCaskill, D-Mo expressed the outrage felt by many:

“At the same time this epidemic is killing tens of thousands of Americans a year we’re seeing the price of naloxone go up by 1,000 percent or more.”

Opioid abuse is an epidemic across our country, yet drug companies continue to rip off the American people by charging the highest prices in the world because they have no shame. The greed of the pharmaceutical industry is killing Americans.

The 10 fold price increase for naloxone has not been uncommon. EMS1.com reported several outrageous examples of price gouging on this emergency drug:

Chris Christie’s opioid panel called for a declaration of national emergency. The panel did call for increased access to naloxone and did address the price increases, ‘by using the Department of Health and Human Services to negotiate reduced prices for government units and mandate every member of law enforcement should carry the life-saving drug.” Generally such mandates have resulted in price increases, so here is hoping HHS can get a better deal.

Christie’s opioid panel, manned by cannabis haters, was quick to reject, and indeed, made no mention of the great promise of medical cannabis  in preventing, treating, and avoiding relapse to opioids. The usefulness and effectiveness of medical cannabis for addressing the opioid problem is becoming common knowledge, yet unworthy of mention by Christie’s “experts.” With this kind of misguided guidance it looks like were are going to be using a lot of expensive Narcan for a very long time.