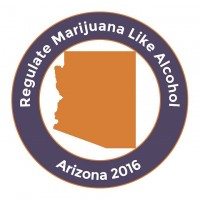 California’s cannabis legalization measure garners most of the headlines and Nevada has already qualified for the ballot, but it looks like the conservative-but-with-a-libertarian-streak state of Arizona may have marijuana on the ballot this November as well. Massachusetts and Maine look like good bets to put marijuana legalization measures before voters as well. In addition to the states qualifying full legalization, Florida has placed medical marijuana on the ballot again and Missouri has less than four weeks to collect the valid signatures required to bring medical marijuana to America’s Heartland.

Arizona, which narrowly passed a medical marijuana measure with 50.13% of the vote in 2010, that included licensed dispensaries, would be a big boon for the cannabis law reform movement, demonstrating that legalization can win statewide in Republican-dominated states as well. The Campaign to Regulate Marijuana Like Alcohol in Arizona is aiming to collect 225,000 total signatures by the July 7th deadline to submit the required 150,642 valid signatures.

If the legalization measure does make the ballot, the vote will likely be very close. A poll taken last December found Arizona voters split on marijuana legalization, with 49% supporting and 51% opposed. Positive tax revenue numbers have come in from Colorado, Oregon and Washington, without the sky falling, potentially helping ease some voters’ concerns in the Grand Canyon State.

The press release from the Campaign to Regulate Marijuana Like Alcohol:

Petition Drive in Support of Initiative to Regulate Marijuana Like Alcohol in Arizona Reaches Another Milestone — 200,000 Signatures

The campaign needs to collect 150,642 valid signatures of Arizona voters to qualify for the November ballot

PHOENIX — The Campaign to Regulate Marijuana Like Alcohol announced Tuesday that it has collected more than 200,000 signatures in support of a proposed initiative to end marijuana prohibition in Arizona. The campaign needs to collect 150,642 valid signatures of registered Arizona voters to qualify the initiative for the November ballot.

“Voters want to have their say on whether Arizona should end marijuana prohibition,” said Campaign Chairman J.P. Holyoak. “It’s appearing more and more likely that they are going to have that opportunity. We’re finding that most Arizonans agree marijuana should be regulated and taxed similarly to alcohol.”

The proposed initiative would allow adults 21 and older to possess limited amounts of marijuana, establish a system in which marijuana is regulated similarly to alcohol, and enact a 15 percent tax on retail marijuana sales, from which a majority of the revenue would be directed to Arizona schools and public education programs.

“The level of interest in signing our petition seems to grow as people learn more about marijuana and the specifics of the initiative,” Holyoak said. “The simple truth is that marijuana is less harmful than alcohol, and marijuana prohibition has been just as big of a failure as alcohol prohibition. Arizonans think it’s time for a more sensible approach, and that’s exactly what we’re proposing.”

The Campaign to Regulate Marijuana Like Alcohol is supporting a 2016 statewide ballot initiative to end marijuana prohibition in Arizona and replace it with a system in which marijuana is regulated and taxed similarly to alcohol. For more information, visit http://www.RegulateMarijuanaAZ.org.