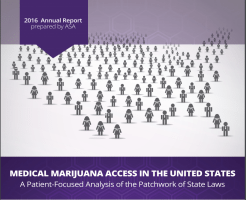 To little surprise, ASA gave California a grade of B+ for its overall average score of 88, based on the categories of patient rights, access to cannabis medicine, ease of navigation (i.e. the bureaucracy), functionality (ease of abiding by the law), and consumer safety.

Each of those categories gets ranked 0-100, based on subcategories. For instance, 40 of the 100 points for the patient rights category come from ranking arrest protection, another 15 for an affirmative defense, another 10 for child custody protection, and so on.

Did you guess Illinois? (Of course you did; it’s in the title.)

Yes, somehow, ASA has come up with an incredibly detailed report card system that ranks California and Illinois (and New Mexico) as equally great medical marijuana states with a score of 88.

Illinois is a better medical marijuana state than Colorado or Oregon, where you don’t even need to be sick to be protected from arrest for possession and cultivation of marijuana.

Illinois is a better place for patients than Colorado or Oregon, where any adult can walk into a store, purchase cannabis and cannabis seedlings, without paying a dollar to the state for registration or a dollar to a doctor for a permission slip.

Illinois, where the possession limit is 2.5 ounces per fortnight and no home grow is allowed, is better than Colorado or Oregon, where any adult can cultivate 3 or 4 mature plants and possess at least a half-pound at home (and patients can possess 1.5 pounds in Oregon!)

This isn’t to completely dismiss the ASA 2016 Report. They’ve amassed a ton of great information in there, especially the chart of qualifying conditions by states.

But reading it reminded me of a Super Bowl spreadsheet I once built. I thought it was wrong that a team like the New York Jets, who are 1-0 in Super Bowls (a 1.000 win pct), should be ranked above my beloved Green Bay Packers, who are 4-1 (a .800 win pct… stupid John Elway!)

So I concocted a formula by which a win counted for 3 pts and a loss counted for 1 point. Thus, an 0-4 Minnesota Vikings or Buffalo Bills team with 4 pts would rank ahead of the New York Jets with 3 pts, because going to the Super Bowl four times ought to count for something.

Then someone convinced me that a one-time Super Bowl winner ought to rank ahead of a four-time loser. I changed the formula to 5 points for a win and 1 for a loss. That also shifted the rankings of some of the other teams from the 3:1 system.

Anyway, the point is that ASA has given a very through explanation of its grading system and it’s well worth a read, but just as my gut that tells me the Packers are a better Super Bowl team than the Jets, my gut also tells me there is no way in hell I’d rather be a medical marijuana patient in Illinois than in Colorado or Oregon.

There’s something wrong with your grading system when California and Illinois are coming out as the top states for medical marijuana patients and legal states of Colorado and Oregon are next best.