What if Cannabis is Joe Biden’s Moonshot Cancer Cure? 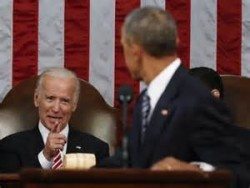 President Obama has appointed Joe Biden, who recently lost his son Beau to brain cancer, to head a “moonshot” to cure cancer. It turns out that cannabis may well be a key to fighting cancer; it is  likely that the VP’s drug war blinders will cause him to ignore marijuana’s anti-tumor powers.

Many people are unaware that Joe Biden was a prime culprit in instigating and promoting the disastrous war on drugs, especially marijuana. As documented by MarijuanaPolitics.com, Joe Biden helped establish the White House office of the drug czar (NODCP), and its mandate to oppose medical marijuana. His zero-tolerance, tough-on-drugs cannabigotry exceeded that of all but the most right-wing, reactionary, authoritarian Republicans.

His entire career in congress consisted of passing one excessive drug war legislation after another, creating mandatory minimums, civil asset forfeiture, and militarized police incentivized to enforce drug violations instead of actual crimes.

Now Joe Biden is saying “politics” is in the way of a cancer cure.  His statement is powerfully ironic. In good part because of Joe Biden’s anti-marijuana politics, cannabis remains a Schedule I drug, declared to be of no medical value and highly dangerous, not available for medical research. Both these criteria are, of course, false. Not only is cannabis one of the very safest of all drugs (it cannot kill), it promises dozens of beneficial medical uses, including hope for those with cancer.

Remarkably, cannabis offers now one of the areas of greatest excitement in the search for a cancer cure.

Cannabis has long been known to be a powerful palliative in the treatment of cancer, easing pain, stopping nausea, and allowing sleep are among these benefits, although still not available to sufferers, except in states with medical legalization, due to marijuana’s Schedule I status.

Many areas of research now point to the anti-tumor powers of cannabis. As such research is not legal in the USA, most of these discoveries come from other continents.  Spain’s Complutense University in Madrid has been a leader.

“Apoptosis is a way to remove unwanted cells. During apoptosis, cellular contents are not released and inflammation does not occur. The apoptotic cells are rapidly engulfed by their neighbors and removed.“

Cancer cells are definitely unwanted and their ideal removal would be through the non-toxic process of apoptosis. The other main type of cell death is necrosis, a highly toxic and inflammatory death that often damages surrounding cells. Necrosis usually stems from cell damage, such as burns, poison, and blunt trauma, characteristics of the radiation, chemotherapy and surgery that define modern cancer treatment.

Amazingly, THC and other cannabinoids seem to attack cancer cells (while not damaging healthy cells), and causing their death through this ideal process of apoptosis! One study found,

The inhibition of cell proliferation prevents cancer cells from multiplying and moving invasively. THC  and other cannabinoids also contribute to anti-angiogenesis.

Anti-angiogenesis is the denial of new blood supply to tumors and is in  the forefront of modern cancer research. Astoundingly, cannabinoids from marijuana seem to help prevent tumors from developing the new blood vessels they need to grow:

Because active angiogenesis is causally involved in the progression of the majority of solid tumors, considerable effort is being made in developing effective anti-angiogenic drugs to treat cancer. In the context of the renaissance in the study of the therapeutic effects of cannabinoids, our findings show that these compounds may be considered promising anti-tumoral agents as they inhibit tumor angiogenesis and growth in vivo with no significant side effects.

There are several other key ways cannabinoids fight cancer. Obviously, cannabis must be considered, discussed, and researched in any moonshot for cancer cure.

The “politics” that separate the now frequent discoveries off cannabis anti-tumor properties from sufferers of cancer has nothing the do with the office politics “stove-piping” mentioned by Joe Biden. The real stifling “politics” have every thing to do the drug war political correctness that disallows any mention of marijuana benefits.

The irony of Joe Biden calling out politics for lack of cancer research progress would be less poignant had not the VP lost a son to brain cancer. As this writer mentioned in an earlier post, I send condolences to Joe Biden and take no pleasure in pointing out the grim truth that medical cannabis may have helped his son. Brain tumors, gliomas, like the kind that stole Beau Biden’s life may well be treatable with medical cannabis. The reader can confirm this with a Google search; Joe Biden would have seen the same results.

Cancer sufferers, all Americans, indeed all humans need to know of the anti-cancer properties of cannabis. The terrible truth remains: if Joe Biden could not allow any acceptance of cannabis as a cancer fighter when his own son lay dying, there is little hope that he will give it any consideration in his moonshot for cancer cure.

President Obama gave Joe Biden an extraordinary opportunity; the Vice President must overcome his own cannabigotry to fulfil this important mission of such huge importance to so many people.