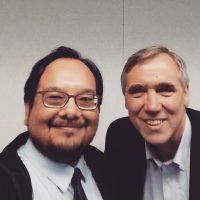 Jeff Merkley, the first United States Senator to back a marijuana legalization measure announced his endorsement for Bernie Sanders, the only Democratic candidate advocating to end the federal war on the cannabis community. Senator Merkley, one of the most progressive United States senators, has plenty of reasons for backing Senator Sanders, but it is notable that both are two of the most progressive, or rather sensible, senators on marijuana policy.

In his op-ed, “Why I’m Supporting Bernie Sanders” in The New York Times, Sen. Merkley states that “Bernie Sanders is boldly and fiercely addressing the biggest challenges facing our country” and that:

It has been noted that Bernie has an uphill battle ahead of him to win the Democratic nomination. But his leadership on these issues and his willingness to fearlessly stand up to the powers that be have galvanized a grass-roots movement. People know that we don’t just need better policies, we need a wholesale rethinking of how our economy and our politics work, and for whom they work.

The first three words of the Constitution, in bold script, are “We the People.” The American story is a journey of continuous striving to more fully realize our founding principles of hope and opportunity for all.

It is time to recommit ourselves to that vision of a country that measures our nation’s success not at the boardroom table, but at kitchen tables across America. Bernie Sanders stands for that America, and so I stand with Bernie Sanders for president.

Our era of mass incarceration is one of the major issues plaguing our nation, deciminating communities of color and poor people regardless of their color. Middle class families are also feeling the pinch of policies that have catered to the prison-industrial-complex for too long as our states are building more and more prisons, leaving inadequate funding for our schools and other important programs. Bernie Sanders indeed has bold proposals that will best take on the prison-industrial-complex, including ending federal cannabis prohibition and eliminating the use of private, for-profit prisons.

I was honored to have the opportunity to meet Senator Jeff Merkley recently and I thanked him for publicly stating his intention to vote for Measure 91, Oregon’s legalization law, and he thanked me for my activism. Senator Merkley has already been working on sensible cannabis law policies, including banking reform and protecting states’ abilities to craft their own marijuana laws without federal interference. Oregon voters have chosen well in placing Senator Merkley in office and our entire nation is better off with him in the United States Senate.

Both Senator Sanders and Bernie Sanders are right for Oregon and elected officials that are country needs. Please join me in making a donation today that will be split between Bernie Sanders and Jeff Merkley and let’s help two public servants that are doing great work for the American people.