Rand Paul Needs to Make Up His Mind on Marijuana Legalization 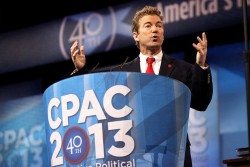 As marijuana policy becomes a major issue in the 2016 presidential race, Rand Paul has made a name for himself as a champion of reform within the Republican party — but while he reaps the political benefits of appearing sensible on marijuana laws, it’s still unclear where the Senator stands on ending marijuana prohibition.

As a Senator, Rand Paul made some moves to scale back current marijuana laws. Working with colleagues across the aisle, he supported ending the federal ban on medical marijuana, which is legal in 23 states, along with Guam and the District of Columbia. Earlier this year, Paul co-sponsored legislation that would have lifted banking restrictions for legal marijuana businesses. The Kentucky Senator also spoke on multiple occasions about the excessive impact of American drug laws, particularly on people of color.

This record has helped him stand out from the crowded field of Republican candidates and has earned him some political support from advocates of marijuana reform. In June, the Marijuana Policy Project ranked Paul as the best presidential candidate on the issue, and went on to donate $14,500 to his campaign. That same month, Rand Paul campaigned in Colorado, where he courted the marijuana industry by organizing the “first ever marijuana presidential fundraiser,” an event that earned him over $100,000 in donations. As those numbers show, Rand Paul’s efforts to woo the marijuana industry are certainly bearing fruit.

While many voters may see Rand Paul as the one Republican candidate with a strong opposition to the failed War on Drugs, his rhetoric on the issue takes a very different turn when he’s facing crowds of social conservatives:

At a lunch Friday with about a dozen evangelical pastors in a Cedar Rapids hotel, [Rand] Paul assured the group that he disagrees with libertarians who support legalizing drugs.

“He made it very clear that he does not support legalization of drugs like marijuana and that he supports traditional marriage,” [said Brad Sherman of the Solid Rock Christian Church in Coralville, Iowa].

Rand Paul likes to portray himself as a libertarian-leaning candidate who appeals to young Republicans, but recent polls show that “nearly two-thirds of Millennials who identify as Republican support legalizing marijuana.” On one hand, Paul is trying to increase his public support from marijuana reformers by echoing their talking points; but on the other, he quickly reverts back to an all-too-familiar anti-legalization position when seeking the vote of drug war advocates.

On several occasions, Rand Paul has criticized his rivals’ positions on marijuana as “hypocritical,” deploring that candidates who have used marijuana in their youth “admit their mistakes but now still want to put people in jail for that.” But Rand Paul shares the guilt for this hypocrisy: he directly benefits from the profits of the marijuana industry, and yet remains unwilling to take a stand to end marijuana prohibition. Instead, Rand Paul tells both sides what they want to hear, making his positions on the issue unclear, if not outright dishonest.