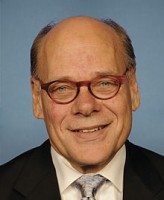 Once again Steve Cohen, US Congressman from Tennessee (TN-09), has shown great leadership in taking on the misguided and cruel drug war. He recently called out Attorney General Eric Holder to end the ludicrous Schedule I legal status for cannabis, just the latest of Cohen’s many courageous challenges to the War on Drugs.

Last summer he called on Michelle Leonhart to resign as DEA administrator because of her hard line on cannabis and her statements undercutting the president.  Cohen recommended that her replacement “ought to be in tune with what the president believes, which is that marijuana is no worse than alcohol. This is going to be looked upon in 10 or 20 years as the dark ages and it is the dark ages – we have someone who needs corrective vision surgery.”