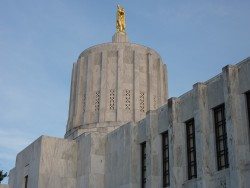 Senate Bill 964 passed through the Senate-only Implementing Measure 91 Committee tonight unanimously and will now move onto the Senate floor for a vote. The vote is expected to occur next Tuesday, giving advocates time to urge senators to oppose the measure. Senate Bill 964 co-sponsor, Ginny Burdick, hopes to have a clear majority in the Oregon Senate to force the Oregon House to pass the measure as-is. It is imperative that concerned citizens contact their senators. You can find your legislators here.

Advocates, including folks here at Marijuana Politics, have been fighting Senate Bill 964 and similar bills this entire session and it took extraordinary measures by Oregon senators to move the bill out of committee. House Democrats, led by Reprsentatives Ann Lininger, Peter Buckley and Ken Helm have been leading the legislative effort to block the bill, protesting the fact that SB 964 allows cities and counties to ban medical marijuana dispensaries without a vote of the people.

Senate Bill 964, while having some good provisions, will decrease the number of plants allowed at grow sites; add fees; allow for garden inspections; mandate reporting; force growers to keep records for two years; and changes the definition to “mature plant” to include non-growing plants that are drying. Senator Prozanski brought up the fact that more people could get arrested and prosecuted by the fact that drying branches could even be counted as mature plants and Senator Burdick even mentioned that she didn’t intend for that to occur, mentioning that a future amendment could correct the mistake; strangely, the committee members decided to pass the bill with such a glaring error.

While patients and advocates have lost a battle, the war isn’t over. Senate Bill 964 still has to pass through the Senate, then move onto a House committee, get a majority vote on the House floor and pass through the Oregon Joint Ways and Means Committee. There is still an opportunity to defeat this bill. Stay tuned to Marijuana Politics for future calls to action over the coming days.