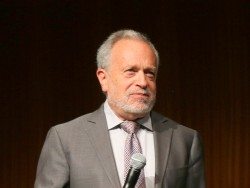 Anyone paying close attention to Robert Reich could tell that the economist and former Labor Secretary under Bill Clinton, was a part of the #FeelTheBern movement. Reich often defends Bernie Sanders’ policies on his Facebook page, but he hadn’t made an official endorsement until today. Reich, a former Harvard Professor and current University of California-Berkeley professor declared his endorsement on Twitter and then went on his Facebook page to expound on why he was supporting the Vermont Senator. Reich stated that he was endorsing Bernie Sanders because Bernie Sanders’ political revolution “is the only means by which we can get the nation back from the moneyed interests that now control so much of our economy and democracy.”

I endorse Bernie Sanders for president of the United States. He’s leading a movement to reclaim America for the many, not the few.

Some commentators may wonder why Robert Reich’s endorsement is being featured on Marijuana Politics. Well, in addition to the fact an endorsement from a Bill Clinton cabinet member boosts the candidacy of a potential nominee that wants to end federal cannabis prohibition, Mr. Reich is a prominent member of the Marijuana Majority, declared his support for legalization on a Reddit AMA (Ask Me Anything). Reich answered, “I’d start by legalizing marijuana” when asked by Reddit user absinthe718, “If you could eliminate a single federal regulation and replace it with some other regulation (or nothing at all), what would it be and why?

The esteemed economist, policy maker, professor and author later provided four reasons for his support of cannabis legalization on, where else, Facebook: “(1) using marijuana is no more dangerous than drinking alcohol; (2) prohibitions on its sale haven’t worked; (3) too many young people — often poor and often minorities — are filling our prisons because of their use or sale of it; and (4) criminalization has created a black market extending down through Central America, accompanied by drug cartels and gang violence that has caused tens of thousands of children to surge over our southern border.”

If the anti-establishment Bernie Sanders manages to overcome Democratic front-runner Hillary Clinton and then the Republican nominee, most likely Donald Trump, many progressives will be hoping that Robert Reich will be tabbed for a cabinet position, such as Treasury Secretary (it certainly won’t be someone from Goldman Sachs.) In addition to economic policy, it appears that Mr. Reich could also be utilized to advocate for Sanders’ platform of ending cannabis prohibition and reforming the failed Drug War.

I endorse Bernie Sanders for President of the United States. He’s leading a movement to reclaim America for the many,…