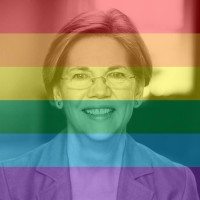 Massachusetts Senator Elizabeth Warren, a liberal darling that many wish would have run for president and hope will be the vice-president on the 2016 Democratic ticket, has had one glaring flaw on her resume: she has previously opposed cannabis legalization. Disheartening to many cannabis law reform advocates, Warren opposed marijuana legalization in 2012, but it looks like she may have evolved on the issue. It is not only uplifting, but also a sign of the growing momentum growing for reform progressive icon Elizabeth Warren is now open to marijuana legalization.

U.S. Sen. Elizabeth Warren says she’s open to proposed ballot questions that would legalize the recreational use of marijuana.

The comments mark a shift for Warren, who supported the medical use of marijuana but opposed full legalization during her 2012 campaign.

Warren said the country has learned more about legalizing marijuana since then, noting a couple of states have already taken the step.

While many understandably feel that Warren, Bernie Sanders and other politicians should just endorse legalization, most mainstream politicians are going to be very cautious on the issue. These elected officials tend to be of an age group that is least likely to support legalization, they will have advisors urging them to be conservative and the conventional wisdom has been that politicians should be stay away from controversial issues. Fortunately, more and more politicians and political operatives are wising up to the fact that supporting marijuana legalization is not a political detriment nationally. Poll after poll and election after election, and the facts on the ground, demonstrate that marijuana legalization is both good policy and good politics.

My experience lobbying politicians is that that elected officials tend to be very “conservative” in most of their political actions as they are likely to keep their political seats so long as they don’t rock the boat. It is up to us, cannabis law reform advocates and citizens concerned about the detrimental impacts of the War on Drugs, to educate politicians and give them no choice, but to support marijuana legalization and greater Drug War reforms. It appears that we are accomplishing that feat, slowly but surely, step by step.

Boston.com has the video: