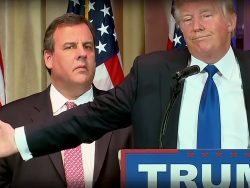 To those of us fighting for liberation of the cannabis plant and for freedom of its consumers, the very thought of Attorney General Chris Christie evokes the gag reflex, especially when already queasy from the image of President Trump.

Of course, there is a good chance Donald Trump will not win the presidency. But if he does, he certainly owes Chris Christie for his early support, bizarre photo ops, and various assorted humiliations. Oh yeah, and for picking up his laundry. Trump has to throw a bone to the former prosecutor. The office of Attorney General would perfectly fit Christie’s penchants for bullying and punishing. And it would let him directly attack marijuana legalization, as he is so eager to do.

As a presidential candidate, the oversized New Jersey governor bragged that he would end the adult use market in legal states, such as Colorado: Chris Christie Calls Marijuana Users “Diseased,” Pledges to Cure Them With Law Enforcement. Interviewed by conservative commentator Hugh Hewitt, Christie was quoted at CNN about state legalization:

I will crack down and not permit it. We need to send very clear leadership from the White House on down through the federal law enforcement. Marijuana is an illegal drug under federal law. And the states should not be permitted to sell it and profit from it.

In addition for his scorn of legal adult cannabis use, Christie also attacks medical use. MarijuanaPolitics.com’s Anthony Johnson recent posted about how Chris Christie Will Enforce Federal Marijuana Laws, Doesn’t Matter if Sick Kids Will Benefit. The post features the pathetic video of the New Jersey father whose daughter was afflicted by constant seizures, begging the gruff governor for medical marijuana help in saving his daughter’s life, only to have his pleas rejected by the portly former prosecutor.

The good news is that the Christie’s presidential bid was a short-lived total failure. The bad news is that as Attorney General he would have the resources of the entire Justice Department to carry out his marijuana threats.

President Obama leaves office with only perilously thin protections in place for adult and medical marijuana use and industries. Because of his refusal to reschedule marijuana’s draconian Schedule I status, cannabis can still be treated as the most dangerous of drugs, warranting the most vigorous enforcement and the harshest penalties.

What Chris Christie could do, and likely would do, to destroy the new cannabis freedoms Americans have voted in over the last decades.

Because of cannabis’ harsh Schedule I status, the draconian laws, statues, and penalties for a new federal cannabis witch hunt and inquisition are already in place.

The DEA and federal prosecutors are chomping at the bit for a revitalized war on marijuana. Bigger budgets, fatter pensions, asset seizures, and easy prosecutions await only for Attorney General Chris Christie to unleash the dogs of (drug) war.

What Chris Christie could not do.

Even though President Obama leaves office with nearly zero protection for cannabis consumers and entrepreneurs, some recent acts of congress are beginning to provide some real protection. So even with the Cole Memo is flushed down the Attorney General’s toilet,  several important constraints now hamper the Justice Department’s ability to persecute cannabis users and the medical marijuana industry.

Recent court actions have enforced this excellent legislation. Lynnette Shaw’s recent win in he United States District Court for the Northern District of California court prohibited further prosecution of the Marin Alliance for Medical Marijuana. Judge Breyer agreed that the Rohrabacher-Farr Amendment indeed prohibits such prosecutions in state legal operations. Thus ended long years of persecution of MAMM and Shaw by US Attorney Melinda Haag. And not long after this ruling, the feds dropped their persistent prosecution and harassment of Harborside Health Center.

Still, with entire resources of the Justice Department, the DEA and IRS, at his disposal, Chris Christie could cause massive harm to the emerging cannabis industries, reverse research and treatments helping people with severe medical problems, and put his foot on the neck of personal liberty in the USA.

With our votes and political actions, let’s make sure there never becomes a President Trump, nor an Attorney General Chris Christie.