Pope Francis: Drug War “Threatens The Credibility Of Our Institutions” 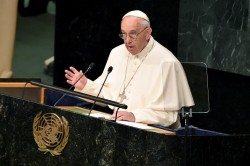 Pope Francis hasn’t been on the right side of history when it comes to marijuana legalization and completely ending prohibition, but he did note the failure of the Drug War during his United Nations address last Friday. After speaking about his concerns around armed violence in countries like Ukraine and Syria, Francis then spoke about the failed Drug War, as the Latin Times reports:

“Along the same lines I would mention another kind of conflict which is not always so open, yet is silently killing millions of people. Another kind of war experienced by many of our societies as a result of the narcotics trade,” Pope Francis said.

The Pope’s address distills the festering frustrations of many of his faithful across Latin America who have to deal with the daily problems that accompany the War on Drugs, from Mexico, to Colombia, to Brazil.

Francis argues that the negative result is not just the availability of drugs, but a surplus of criminal activity and violence. Without naming individual countries, the Pope told the U.N. General Assembly that the Drug War was failing.

Longtime critics of the Drug War, especially many that previously served in law enforcement, know that prohibition increases the price of the drugs, making corruption of officials inevitable. This corruption, Francis stated, “has penetrated to different levels of social, political, military, artistic and religious life, and, in many cases, has given rise to a parallel structure which threatens the credibility of our institutions.” While Pope Francis, isn’t infallible on the Drug War (sorry), it is encouraging that he recognizes its failings. Hopefully soon, Francis will add his support to common-sense harm reduction policies and other crucial Drug War reforms.