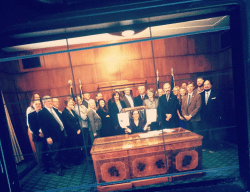 While the 2015 Oregon legislative session wasn’t perfect for the Oregon cannabis community, as usual, it was two steps forward and one step back, it is a sign that the marijuana movement is progressing well when the Oregon governor hosts cannabis advocates at marijuana bills signing ceremony. Governor Kate Brown signed Senate Bill 844, Senate Joint Memorial 12, House Bill 2041 and Senate Bill 460 with key legislators, lobbyists and activists. It was an honor to join the group for the historic signing ceremony.

Senate Bill 844 allowed for youth expungement of marijuana offenses, added protections for medical patients seeking medical treatment such as transplants and established a medical marijuana task force. Senate Joint Memorial 12 calls upon Congress to make necessary changes at the federal level to allow the effective implementation of state marijuana laws. House Bill 2041 moved the tax from the grower level, as mandated under Measure 91, to the retail level. Senate Bill 460, the so-called “Early Start” or “About Time” bill, allowed existing medical marijuana dispensaries to start selling up to 7 grams of cannabis flower to adults starting on October 1st, about a year ahead of when we can expect Oregon Liquor Control Commission-regulated retail outlets to start selling a wide variety of cannabis products, along with flower, to adults.

There is still more work to be done on marijuana policy at the Oregon Legislature, including reducing marijuana penalties to be completely in-line with our alcohol laws and ensuring that sick and disabled patients have access to medicine, but today can be a day of celebration for how far we have come. Oregon advocates should be commended for helping craft cannabis laws that create jobs, better prioritize law enforcement resources and can be the model for the rest of the country.

Special thanks to Studio McDermott for the featured photo.