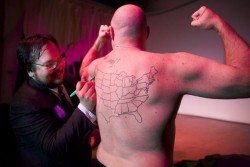 Tomorrow, October 1 at 10:00am, adult Oregonians throughout the state will be making their first legal purchases of marijuana – and Marijuana Politics will be there!

Oregon also set the record so far for the greatest measure of support statewide for marijuana legalization at over 56 percent of the vote.

Our coverage begins with Anthony Johnson, chief petitioner of Measure 91, who will make his first purchase at Cannabliss & Co at 1917 SE  7th Ave. in Southeast Portland. Cannabliss is located in a historic restored firehouse and owner Matt Price has been a longtime supporter of marijuana reform.

Cyd Maurer will make her first legal purchase at The Greener Side at 1553 Oak St in Eugene. Cyd is a former television anchor for local station KEZI who was fired when a workplace drug test discovered metabolites of marijuana in her system.

I will make my first purchase at the grand opening of Cannacea at 10735 NE Halsey St. in Northeast Portland. I will be live-streaming the event on 420RADIO.org and my @RadicalRuss Periscope account. Anthony Johnson will join me later as the first 100 adult consumers and the first 100 medical marijuana patients will receive free gift bags. Local rock station KINK-FM will also be there broadcasting live. You can hear a replay of the events at 3:00pm on The Russ Belville Show and I’ll have photos, audio, and video on all my @RadicalRuss social media accounts.

I’ve made many marijuana purchases in my life. Most of them happened in the parking lots of bars or the living room of someone I was pretending to like, always with the threat of arrest and jail hanging over me for possessing my purchase. Later in life, I moved to Oregon where I still made those purchases, but with the lesser threat of a ticket hanging over me. Later still, I made those purchases with the protection of a medical marijuana caregiver’s card, no longer afraid of a punishment for possession, but weighed down with a conscience that told me I was abusing a system designed for sick people for my own selfish purposes. Recently, I’ve made completely legal marijuana purchases in Colorado and Washington, free from fear, but burdened by overtaxation and the stress of travel.

Tomorrow, for the first time in my life, I will make a legal purchase of marijuana in my hometown. Not overburdened by taxes, but absolutely free from taxes for the rest of this year.

Yes, the purchase will be limited to just a quarter-ounce of flower, four seedlings, and seeds. No, I won’t be able to purchase concentrates, extracts, tinctures, edibles, or topicals until we get our adult marijuana shops in fall of 2016. Indeed, the tax rate jumps to 25 percent for me at these medical marijuana dispensaries come January. Sure, we still have to work out the transition from medical marijuana dispensaries to adult marijuana shops and we don’t quite know where all these places will eventually locate, aside from virtually nowhere east of the Cascades. Eventually, I’ll be shopping at adult marijuana shops charging 17-to-20 percent tax, the lowest in the nation.

It’s been a hell of a journey and we’re not through yet. The reporters of Marijuana Politics purchase legal cannabis tomorrow in Oregon, then it’s right back to the work we do to bring that same experience to cannabis consumers in the other forty-six states.