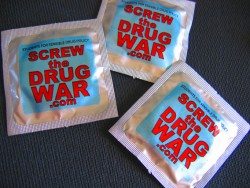 Marijuana is safer than alcohol has been a prominent battle cry among many cannabis law reformers for years now. Of course, when you base relative harm upon science and facts, clearly marijuana is safer. When you consider addiction, lethal overdose, severe health consequences and link to violent criminal activity, it is easy to see that alcohol is more dangerous.

It now looks like cannabis law reformers can now add that marijuana-influenced sex is safer than alcohol-influenced sex after Oregon researchers have found that while college students are more likely to have sex after utilizing cannabis, they keep their wits about them and still use condoms at the same rate as when sober. Binge drinking, a dangerous epidemic on college campuses, leads to both more sex and a lower usage of condoms, increasing the likelihood of sexually transmitted diseases and unwanted pregnancies.

“Marijuana use may lead to sex through increased arousal and disinhibition and/or may be sought out to facilitate meeting a partner and to enhance pleasure,” wrote (David) Kerr, who is an associate professor in the OSU School of Psychological Sciences.

The study also found that binge drinking students were likely to throw caution to the wind when it came to condom use.

But the marijuana smokers continued to use condoms at the same rate.

“Unlike alcohol, marijuana may cause users to compensate for impairments in inhibitory control by changing decision-making and risk perception,” the study said.

While I’m certainly not a prohibitionist, it is important that our society understand the facts about alcohol and to reduce the harms caused by the drug. I am often dismayed at the celebration of alcohol at events and in our media. I previously blogged about the fact that Oregon universities were doing a disservice to students by perpetuating the War on Marijuana. While federal law forces these colleges to have a policy upholding federal law, these institutions of higher learning should be doing all that they can to change federal policy. Our current federal policy and national culture is literally killing young students.

The yearly statistics regarding alcohol and college students between the ages of 18 and 24 are very troubling: over 1,800 students die from alcohol every year; more than 690,000 students are assaulted by someone under the influence of alcohol every year; and more than 97,000 students are victims of sexual assault every year. Considering all of the bad choices people make under the influence of alcohol, it isn’t surprising that researchers found that alcohol leads to less safe sex practices.

Cannabis prohibitionists latch upon anecdotal stories of bad consequences and tragic occurrences that have been linked to marijuana. And to be fair, marijuana is not completely harmless and it should only be used (non-medically) by adults.

When prohibitionists cling to a handful of bad marijuana stories, they are spending time fear-mongering around a few cases while ignoring thousands upon thousands of harmful alcohol incidents that occur every year. It is hard to take serious people who work to keep marijuana illegal while they ignore that tens of thousands of college students are raped by criminals under the influence of alcohol every year and over 1,800 young students die from alcohol yearly.