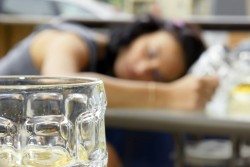 As just about the entire world is now aware, cannabis is now legal in Oregon. Adults over the age of 21 can possess, cultivate, share and purchase marijuana. While the Measure 91 legalization measure didn’t change the law for those under 21, under an ounce of cannabis remains a decriminalized civil infraction. While adults are experiencing freedom across the state and many localities are now better prioritizing law enforcement resources, while creating jobs, universities across the state are still maintaining a Reefer Madness public stance on campus. The Oregonian reports:

If you’re a student 21 or older, you don’t get a pass if caught using marijuana on campus. Nor can you smoke weed in the privacy of your dorm room. Marijuana, in all its forms, still violates school regulations at every Oregon college that receives federal funding.

“Universities, being federally funded, are obligated to follow federal regulations when it comes to treatment of controlled substances such as marijuana,” said Kelly McIver, University of Oregon Police Department communications director. “Don’t expect a big change, because marijuana will still be a no-no here on University of Oregonproperty, regardless of the age of a person.”

Not that most college security officers are about to detain anyone for possessing small amounts, or refer them to disciplinary action for first, minor offenses. Even Reed College, where campus safety officers take a hard line on marijuana use despite the school’s counter-cultural reputation, tends to give a kid a break in initial relatively minor cases, administrators say.

It is heartening that college security isn’t going to go out of their way to detain students and try to ruin their educational opportunities, but the public hard-line stance is likely to push more students to drink alcohol, a much more dangerous endeavor. Anyone that has been in college knows that students are going to party and seek out mind-expanding substances; expecting students to abstain from all drugs is like expecting them to abstain from sex–abstinence isn’t going to be a successful policy.

Binge-drinking is a very dangerous activity that plagues college campuses. Drinking alcohol to excess can cause fatal overdoses and contribute to serious crimes. Colleges should promote safer choices and base policies upon science. Pushing students to drink, by maintaining a hard-line public stance on cannabis, is completely contrary to how these institutions of higher learning should conduct themselves.