Why Do They Call It “Adult Use?” And Why You Should Too 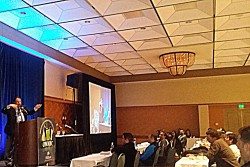 “Adult use, adult use” chanted the crowd at the Oregon Medical Marijuana Business Conference, exhorted on by premier Oregon cannabis attorney Leland Berger.  He is referring to marijuana use in the four states and District of Colombia now (or soon) allowing adults to possess and use the newly legal cannabis, and the many more states planning to do so soon.

Berger pleaded with the large crowd, “can we NOT call it recreational use again?  Adult use, adult use!“

The semantic distinction the activist attorney makes is important in how it frames newly liberated and legal cannabis use in these pioneering states. Being able to refer to “medical use” has helped pass state reforms since California in 1996 and Oregon’s successful medical marijuana vote in 1998. “Medical use” has been harder to demonize by prohibitionist propagandists. Indeed, Merriam-Webster defines ‘recreational drug‘  as one used “without medical justification.” Berger believes that referring to “adult use” is psychologically superior and an important key to future legalization success.

For many, the term “recreational use” in several ways belittles the use people actually make of cannabis.

This should not be so; the actual term re-create suggests a process of renewal, a lofty and worthwhile goal, and actually often the positive result of cannabis use. It does help one renew and re-create. But that is not the current image of “recreational drug”.

How does that image differ from what comes to your mind when you consider “adult use of marijuana?” Do you not see an image more like a cocktail party of young (and not so young) adults, with the addition of perhaps a pot pipe passing around? Or now, much more likely, vapor pens sipped discretely by the happy adults. Like, smoke is so 20th century.

Consider too, all the many reasons people use cannabis that are not “recreational” in nature.

For many people, all cannabis use is medical use. This becomes clear especially when the wellness perspective is considered: Cannabis helps people relax, enjoy life, and relate to others, all keys to personal well-being and all medically important in keeping people alive.

How about ‘spiritual use?’ The adult use of cannabis to attain spiritual enlightenment goes back millennia and is not well described as “recreational use.” Cannabis use plays an important role in many religions including Hinduism with its bhang and Christianity with its Old Testament anointing oil, brimming with kaneh bosem, an early term for cannabis.  And many people by-pass the religious aspect but use cannabis spiritually as a sacrament for personal transcendental, uplifting experiences with nature, with the universe, and with other people.

How about ‘productivity use?‘ Many people use marijuana, especially energetic, focusing strains of cannabis, to be productive and to create. Perhaps the best example was Carl Sagan hitting up Dr. Lester Grinspoon for a joint. “Lester, I hate to do this, but could I ask you to give me that second joint? I have to finish writing a chapter tomorrow, and I’d love to have that.”

Surely this and other productive, creative use is not what is thought of as ‘recreational use.’ By the way, the fact that Carl Sagan, one of the greatest and most expressive minds of the 20th century, enjoyed and benefited from cannabis use, says a lot of good things about cannabis use.

Adults use cannabis for a variety of reasons and generally with positive results, often far transcending the rather lame label, “recreational use.” Prohibitionists have and will continue to use the term to denigrate legal use.  On the other hand, your reference to “adult use” points out one of the most positive aspects of ending cannabis prohibition: Legalization for adults, like Oregon’s Measure 91 always entails (and does accomplish) reducing underage use.

So let us join with Leland Burger and chant (or not), and each personally begin to use the term, “adult use!”