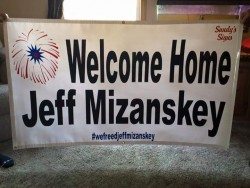 The tragic plight of Jeff Mizanskey, a Missouri man sentenced to die in prison with a life sentence, amazingly gets out of prison tomorrow thanks to the tireless efforts of his caring family and a group of advocates that started a massive movement for one man’s freedom. The fact that a nonviolent man could be sentenced to life without the possibility of parole, galvanized Drug War reform activists across the globe.

Thousands of people joined the Free Jeff Mizanskey Facebook page and signed online petitions. Thanks to the great activists at Show-Me Cannabis (full disclosure, I am proud to have once been a board member), particularly SMC Chairman Dan Viets, who went on to become Mizanskey’s attorney, the Republican-dominated Missouri Legislature passed a bill to ensure that no one would ever be subjected to the same draconian sentence of life. Unfortunately for Jeff, the bill wasn’t retroactive, so he still needed assistance from Democratic Governor Jay Nixon, who did indeed commute his sentence.

Dan Viets, my first marijuana activist mentor, argued brilliantly (I presume) before the Missouri Parole Board, because the state announced that Jeff would be getting out of prison just several days later. It is amazing that the day of freedom for Jeff Mizanskey has finally come. Between 8am and 10am Central Time tomorrow morning, Jeff Mizanskey will be exiting prison for the first time in more than 20 years and into the loving arms of his family and advocates that dedicated their lives to the freedom of one man. I am so happy for Jeff, the entire Mizanskey family and everyone that invested themselves in this important fight for justice. A sincere and heartfelt thanks to everyone who took the time to fight for his freedom. It is amazing that #FreeJeff became #WeFreedJeffMizanskey thanks to the dedication of some tremendous freedom fighters that weren’t going to let such an injustice stand any longer.

Life without parole for nonviolent marijuana offense: Governor commuted sentence after international campaign to free him.

THE STORY: Freeing Jeff Mizanskey took 21 years, signatures from 391,254 petition signers, a documentary, letters from 126 Missouri lawmakers, a plea for clemency from the prosecutor, a bill from Republican state representative Shamed Dogan, billboards, and a sustained effort by nonprofit criminal justice reform organizations like Show-Me Cannabis. Because of Missouri’s “prior and persistent drug offender”  law, Mizanskey had been sentenced to life in prison, without the possibility of parole, for nonviolent marijuana charges. He gets out Tuesday morning.

WHAT’S HAPPENING: Mizanskey will be freed from the Jefferson City Correctional Center.