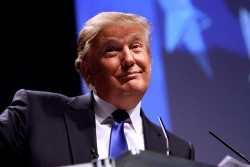 As he made clear in his announcement speech, Donald Trump has taken an interest in crimes happening along the U.S.-Mexico border. Making the case for the construction of a “great wall” between the two countries, he complained that Mexican immigrants are “bringing drugs” and “crime” to the United States as a part of the ongoing Mexican Drug War, a conflict which is largely the result of the War on Drugs waged in the United States. Despite this, Donald Trump continues to support drug war policies at home and oppose reforms that could attenuate the conflict in the area.

Donald Trump knows the War on Drugs doesn’t work. In 1990, he spoke boldly about what needed to be done to put an end to drug-related crime:

Billionaire New York developer Donald Trump says that legalizing drugs is the only way to win the war against what he considers one of America’s most serious problems.

Trump blamed the country’s drug problems on politicians who “don’t have any guts” and enforcement efforts that are “a joke.” “We’re losing badly the war on drugs,” Trump told 700 people at a luncheon Friday. “You have to legalize drugs to win that war. You have to take the profit away from these drug czars.”

“What I’d like to do maybe by bringing it up is cause enough controversy that you get into a dialogue on the issue of drugs so people will start to realize that this is the only answer; there is no other answer,” Trump said.

Since the 1990s, our prohibitionist policies have remained in place and violence related to the illegal drug trade has skyrocketed. The Mexican Drug War alone has claimed the lives of over 100,000 people in eight years and displaced over a million people as a result of the cartel violence. As Donald Trump surely knows, many of those displaced from their homes in Mexico migrate north to the United States. Meanwhile, drug cartels reap huge profits from the illegal drug trade, which fuels the lawlessness that Trump is calling attention to.

As Anthony Johnson points out, Donald Trump was right when he said legalization is the answer to these problems. On top of raising tax revenue and saving millions on law enforcement, marijuana legalization has shown to be an effective policy to reduce the profits of drug cartels:

“Is it hurting the cartels? Yes. The cartels are criminal organizations that were making as much as 35-40 percent of their income from marijuana,” [retired federal agent] Nelson said, “They aren’t able to move as much cannabis inside the US now.”

In 2012, a study by the Mexican Competitiveness Institute found that US state legalization would cut into cartel business and take over about 30 percent of their market.

Despite knowing that legalization is, in his own words, “the only way to win” the War on Drugs, Trump no longer favors this position, arguing instead that marijuana legalization is causing problems in states like Colorado. “I think it’s bad, and I feel strongly about that,” he said this year. While he suggests he would allow states to enforce their own marijuana laws should they choose to legalize, Donald Trump stated multiple times that he does not support ending marijuana prohibition “unless it’s medical marijuana.”

According to Donald Trump, the United States needs a president “who thinks like a winner;” but while he knows that the War on Drugs can only be won with legalization, he opposes this position and provides no viable alternative. In this way, Trump has come to resemble the gutless politicians he denounced earlier in his career. Rather than leading the way towards peace in the Mexican Drug War, Trump seems satisfied merely complaining about it, and that’s about as far as one can get from thinking like a “winner.”