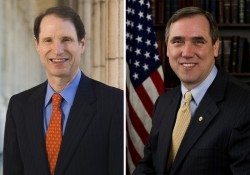 Medical marijuana has been called “a wonder drug” because of its low toxicity (there is no lethal dose) and high effectiveness in dozens of medical and health conditions. Remarkably, cannabis is an antioxidant, anti-inflammatory, anti-glaucoma, anti-dementia, anti-diabetes, anti-depressant, and anti-tumor agent. Yet federal restriction have allowed almost no study. The little research that was allowed was directed by political correctness and cannabigotry to try to find negative effects.

The action by these senators is actually followup to Senate action last summer demanding that the agencies stop stalling cannabis research. In July, the DEA administrator, ONDCP ‘drug czar’, and HHS head all received from these eight senators a request to work together to end the stifling medical marijuana research roadblocks. Now, these bureaucrats just received fresh inquiries from the Senate due to the inadequate responses to the July request. Senator Warren wrote:

“There are currently numerous federal and state regulatory barriers to researching marijuana.  This regulatory scheme which limits medical marijuana research is outdated and in desperate need of serious and immediate review, and these problems are exacerbated by a lack of coordination between the agencies and states.”

Unfortunately, this Senate prodding of these obstructive bureaucracies was not bipartisan. Surely, at least one Republican could sign on; Rand Paul where are you? Paul, the Kentucky Republican is one of the Senate’s best in terms of criminal justice reform and marijuana policy. He is cosponsor of the ground breaking CARERS Act, which is unfortunately languishing under the repressive thumb of Senate Judiciary Chairman, Chuck Grassley.

Still, this forceful followup by eight powerful senators should show these drug war bureaucrats that the time of unquestioned delays in changing marijuana policy are over.