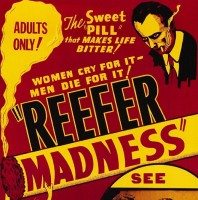 With a new editorial entitled “City should embrace more strict pot rules,” Colorado’s biggest and most influential marijuana scaremongering mouthpiece is at it again. The Colorado Springs Gazette, the state’s second-most-circulated newspaper, is the little prohibitionist that could, constantly ranting at its daily subscriber base of 65,000 about the dangers of cannabis legalization, facts be damned. That 65,000 figure, by the way, represents about 15% of the daily circulation enjoyed by the true force in Colorado conversation, The Denver Post, which has an entire staff dedicated to writing, successfully it seems, about marijuana culture under the The Cannabist label.

As I wrote last summer when picking apart another shady editorial, The Gazette is unquestionably a paper with an agenda:

Owned by Denver billionaire Phil Anschutz, who also owns The Weekly Standard and Washington Examiner, and has donated tens of thousands of dollars to Republican and “family values” causes, the Gazette recently ran a questionable and widely-ridiculed modern day Reefer Madness hysteria hit piece entitled Clearing the Haze and written by a well-known local anti-pot crusader.

Lest you think I’m simply appealing to the person here, allow me to address the article itself which is devoid of facts and high on emotion in typical Gazette fashion. This is, after all, the same paper that compared potential public “marijuana whistleblowers” to the FBI agent who blew open the Watergate scandal.

The piece begins by touting Colorado Springs’s “niche” as a place inhospitable to marijuana:

Colorado Springs Mayor John Suthers and the City Council share a sober and rational approach to marijuana and have made Colorado Springs our state’s least attractive big city environment for growers, users, dealers and cartels. City officials should keep going, maintaining our community’s niche as a place that’s not turning into the North American Amsterdam.

You get all the meaningless buzzwords in there? Sober! Rational! Amsterdam! Cartels! Wait, what? Cartels? It seems that one little newspaper hasn’t seen the news that Mexican cartels have been hit hard by the state’s sober and rational approach to regulating and selling recreational marijuana. In fact, one could argue that Colorado Springs, the state’s second-largest city, is in fact guilty of abetting Mexican cartels by refusing to allow the sale of recreational marijuana within its borders.

A city task force is preparing medical marijuana recommendations for the council, and we hope they are strict. Whatever we have done to date is working, as the local economy is hot and getting hotter.

While Denver’s economy is unquestionably “hot,” Colorado Springs is struggling. Here, I defer to the Gazette‘s own reporting from last year in which they described the city’s unhealthy reliance on its many local military installations and explained that a small burst of increasingly low-wage service sector jobs can’t keep up with its growing population:

Expect more of the same – gradual improvement – from the Colorado Springs economy during the rest of this year and into 2016, say economists who follow the local economy…

Their forecasts come as the area’s economy dodged what could have been a major setback – the Army said Thursday that Fort Carson would lose about 365 soldiers, or about 1.5 percent of the troops stationed there, as part of plans by the service to reduce active-duty personnel by 40,000 over the next two years.

But another threat remains – the Army is expected to cut 30,000 more troops this fall if automatic federal budget cuts, called sequestration, happen as scheduled Oct. 1…

And all of this as the city bleeds young professionals (again, from The Gazette):

Wages in the Colorado Springs area have declined since 2000 as the local economy has traded high-paying jobs in manufacturing, information technology and construction for low-wage jobs in the hotel, restaurant and call center industries. The average pay of jobs that were lost is nearly three times higher than the jobs that replaced them, resulting in a decline in the area’s wages of more than $150 million between 2010 and 2013…

The lower-wage jobs also have been blamed for an exodus of young professionals, which could hurt the local economy long term.

The paper then proceeds to tick off a number of proposals it believes would be beneficial to (seriously) “furthering our earned reputation as a community that seriously regulates pot.” These proposals range from extending a moratorium on the opening of new medical dispensaries to reducing the hours that existing dispensaries can operate. To be fair, some of the regulations are reasonable, like limiting grows to particular industrial zones. But none of it is coming from a good place. In fact, the last paragraph gives it away:

Let Denver be the symbol of recreational drugs. Meanwhile, let the Springs attract those business owners, residents and tourists who favor order over a chaotic drug market that is the butt of jokes around the world.

Yes, progressive Denver, with its top-ten ranked population of wealthy millennials and blazing housing market and thriving restaurant scene and world-class cultural destinations is the butt of jokes around the world, while Colorado Springs, obviously, with its quality newspaper, “infamously atrocious roads,” “Focus on the Family” values and prohibitionist policies that not only thwart the will of its own voters, but deprive the city of potentially millions in tax revenue, while operating under an opaque budget so mismanaged that its city employees won’t see raises for the indefinite future, is supposedly the bright shining city on the hill.

Yes, it is “totally” understandable that Colorado Springs wouldn’t want to emulate the decline going down in amoral, but booming, Weed-Central Denver. Keep talking, Gazette. It’s a good look and it gives me something to do. Don’t forget your own reporting, though, about the millions your city’s schools are receiving thanks to recreational marijuana sales everywhere else in the state. Despite Colorado’s objective success legalizing cannabis, The Gazette is somehow still spewing the last gasps of Reefer Madness in this great state.