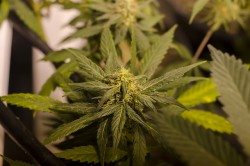 All over a little survey funded by an out-of-state anti-marijuana organization called Community Alliances for Drug Free Youth. Here’s the Gazette:

A poll sponsored by the Community Alliances for Drug Free Youth shows that slightly more than half of Coloradans are now opposed to marijuana legalization.

According to a release from SmithJohnson Research, 51 percent of 600 likely voters in Colorado said they would vote against marijuana legalization if it came up today. The poll, which was conducted over the phone with self-identified 2012 voters, has a margin of error of plus or minus 4 percent.

The survey results show a change in mood in the years since Amendment 64 was on the ballot when 55 percent of Colorado voters supported legalizing recreational marijuana sales to adults over the age of 21.

Community Alliances for Drug Free Youth (CADFY) is a California-based prohibitionist organization also known as Californians for Drug Free Youth. According to the Gazette, they are a “nonprofit organization based in San Diego that promotes state, federal and international drug policies that keep drugs out of the hands of youth.” According to their website, CADFY wants you to go on social media and warn your friends, family, and coworkers about the “dangers of marijuana and other illicit drugs.” They also provide links in their “news” section to unapologetic propaganda like “Clearing The Smoke on Medical Marijuana.”

The Gazette itself is a newspaper with an agenda. Owned by Denver billionaire Phil Anschutz, who also owns The Weekly Standard and Washington Examiner, and has donated tens of thousands of dollars to Republican and “family values” causes, the Gazette recently ran a questionable and widely-ridiculed modern day Reefer Madness hysteria hit piece entitled Clearing the Haze and written by a well-known local anti-pot crusader.

The fact is that all recent major polls run by respected pollsters with real records (try googling “Community Alliances for Drug Free Youth” and “SmithJohnson Research”) are showing the same thing: Support for marijuana legalization is up up up. Not only in Colorado–where, at last check, 89% of Colorado voters supported medical marijuana and 62% supported personal use, but also nationwide where there is clear majority support. Today a new Public Policy Polling survey shows that even Republicans in the early battleground states of Iowa and New Hampshire believe that “states should be able to carry out their own marijuana laws without federal interference.” The numbers are astounding: 64 and 67 percent of Republicans in each respective state agreed with that statement.

So why should we believe a poll sponsored by an organization that is trying to interfere with another state’s politics again? And why is Colorado’s second largest newspaper so publicly fighting such an obviously lost cause?