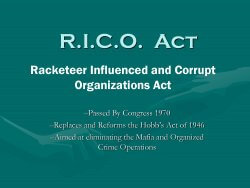 Attorney General Jeff Sessions remains a sworn enemy of all things marijuana. Alarmingly, a half-century-old law may now give him the power to soon devastate medical marijuana and thriving American marijuana businesses. The 1970 Racketeer Influenced and Corrupt Organizations Act (RICO) was designed to attack organized crime, the mafia. Since then vaguely written act has metastasized into any easy,  too easy, way for prosecutors to score wins, with horrendous punishment inflicted upon the prosecuted. Now the RICO law gives Jeff Sessions an easy, too easy, way to bust the robust American cannabis industry.

Even without RICO, Jeff Sessions has, as attorney general, a range of powerful prosecutor tools for his vendetta against cannabis.

Foremost is marijuana’s misplaced but long-standing status as a Schedule I drug, highly dangerous and without medical use, the most restrictive and punitive classification. This horrendous legal blunder has lasted decades. The best hope for change was under the last presidency, but it did not happen. Please see Obama Leaves Behind a Marijuana Nightmare. Marijuana as Schedule I gives Jeff Sessions enormous powers to destroy the lives of Americans involved with cannabis medically or as entrepreneurs.

Another key weapon treasured by Jeff Sessions is asset forfeiture, the taking of citizen’s cash and property of the police and prosecutors. Asset forfeiture allows the DEA and other police to easily take money and property without even making an arrest, simply by declaring the cash to be drug-related. Sharing schemes with the feds allow local and state police to send such lucre to the DEA whereby most of it is returned to the agency who took it, allowing them to spend it as they please while avoiding any state laws restricting asset forfeiture.

Another discretionary tool available to the attorney general is the direction given to 93 US attorneys and their 5,000 assistant attorneys. As one of his first acts in office Sessions mandated his attorney army to always pursue the harshest charges for all drug defendants.

Potent as these weapons are, RICO adds a dangerous legal opportunity for Sessions to harm the lives of those he chooses. The Racketeer Influenced and Corrupt Organizations Act was written to powerfully assist the prosecution of people working together in anything the goverment considers crimes.

A lot of states are just simply breaking the law. And a lot of money is being made and banked. One RICO prosecution of one producer and the banks that service them would shut this all down. Is such a prosecution going to happen?

But one prosecution that invokes a supremacy clause against one large dope manufacturing concern, and follows the money as it normally would in any drug operation and seizes it, would shut, would chill all of this. But I haven’t seen on in nine months, yet. Is one coming?

Supposedly a conservative, Hewitt should be ashamed of himself for such anti-Federalist, anti-states rights, anti-business, and anti-freedom remarks.

L. Gordon Crovitz, writing for Reason.com explains some of the prosecutorial advantages of RICO:

With the vague crime of RICO, prosecutors have enormous power to bring cases against targets simply because they are in some way unpopular.

The act is prized by prosecutors and mourned by civil libertarians. It allows the addition of federal crimes on top state charges for ‘predicate acts.’ Growing or transporting marijuana is such a predicate act. The addition of these federal RICO charges add long prison terms, tripled fines, and other crippling punishments.

As scary as Session’s ability to use RICO as a club is the fact that states, even individuals, can use RICO to attack activities they dislike, activities including growing marijuana. The Cannabist documents a recent case where horse farm neighbors complained, and sued through RICO, that the smell of marijuana reduced their property value. A 10th U.S. Circuit Court of Appeals in Denver ruling may present big RICO problems. Alicia Wallace reports,

In remanding that case to district court, the judges left the door open for something that legal experts and case attorneys say could rattle the legal marijuana industry: that private-property owners could potentially bring federal racketeering claims against neighboring marijuana grows and dispensaries.

Whatever their form, RICO laws are a danger to cannabis entrepreneurs. Stay tuned to see how Jeff Sessions and perhaps anti-cannabis citizen groups put them to evil use.