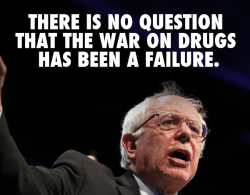 Treating drug use as a crime clearly hasn’t worked for the United States. Just as alcohol prohibition enriched Al Capone and other gangsters, the Drug War has enriched cartels and other criminal organizations. Prohibitionist policies have increased the potency of drugs and tax-exempt profits of outlaws. Of course, the War on Drugs has detrimentally impacted people of color and poor people of all colors, creating a New Jim Crow era that has decimated black communities across the United States.

For far too long, the tragic consequences of America’s drug policies have been ignored by politicians. Thankfully that is starting to change as Bernie Sanders continues to attack the Drug War after making criminal justice reform a foundation of his presidential campaign. (To his credit, Republican Senator Rand Paul has also been good on the issue, but GOP primary voters haven’t warmed to his message.) Rightfully proclaiming the Drug War a failure, Sanders has introduced a bill to end to federal marijuana prohibition, proposed ending the private prison racket and wisely called for treating addiction as a health care issue at the last Democratic presidential debate as Time reports:

Vermont Senator Bernie Sanders said addiction is a “disease not a criminal activity” during a discussion on America’s heroin epidemic during Saturday night’s Democratic debate.

The debate took a somber turn when the candidates addressed the high levels of heroin and opioid use across the country. According to the Centers of Disease Control and Prevention, the rate of heroin-related overdose deaths have quadrupled between 2002 and 2013. The Senator’s home state of Vermont has been hit particularly hard by heroin addiction, with the governor calling it a “full-blown crisis” in 2014.

On Saturday, Sanders said the epidemic calls for a “radical” change in the approach to addiction in America, saying the health care community needs to “get its act together” when both prescribing opioids and addressing issues of mental health and addiction.

While he hasn’t been perfect on drug policy reform, it has been heartening to see President Obama advocate for some sensible policy changes and release some nonviolent drug prisoners early from their draconian sentences.  Positively, the entire Democratic presidential race, aided by Sanders’ policy positions, has seen good rhetoric on drug law reform, making it likely that we can see more positive reform if Democrats maintain the White House.

When looking for inspiration, the United States can look at Portugal and the numerous positive results the country has experienced after a decade of wisely treating drug use as a healthcare issue instead of a law enforcement issue. Individual states can also help lead the way, just as they have done on cannabis policy. I certainly hope to work towards more sane drug policies here in Oregon as it is clear that we will never arrest and jail our way out of drug use. It is time to end the failed War on Drugs, and whether he wins or loses, Senator Bernie Sanders has helped dramatically change our national discourse on drug policy.