What Happens to Medical Marijuana in 2016? (Part Two – How Oregon Screwed Itself) 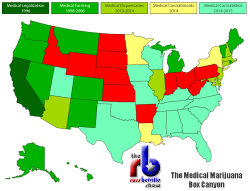 In our last installment, I detailed how the arc of medical marijuana legislation in the United States has bent toward pharmaceuticalization: from wide-open California medical marijuana in 1996 to the recent phenomenon of fifteen “CBD-only” states and counting.

But medical marijuana is being severely altered anyway. In Washington, most of the existing dispensaries will be forced to close their doors. Where patients used to be able to cultivate 15 cannabis plants and possess 24 ounces of usable marijuana, they may now only cultivate 6 plants and possess 3 ounces of marijuana, 48 ounces of edibles, 216 ounces of tinctures, and 21 grams of extracts. Cooperative gardens are now limited to just four patients and sixty plants. In Oregon, changes aren’t as drastic. Patients retain their possession limit of 24 ounces and cultivation limit of 6 (mature) plants, but now there is a hard limit of 12 plants total in cities and 48 plants total in rural areas, regardless of how many patients the garden is grown for.

(Readers in red states, try to calm down as you read about people complaining about “only” 6 plants and “just” 3-to-24 ounces and “limits” of 48-to-60 plant gardens.)

As the medical advocates see it, because legalization passed and medical’s changing, the former caused the latter – post hoc ergo propter hoc. As I see it, legalization is shining a spotlight on medical, exposing its flaws that legislators were keen to change anyway, but in the spotlight, they can no longer ignore.

Medical marijuana advocates are loathe to accept their own responsibility for these changes. In Oregon, the state began with a limit of three mature plants and three ounces, with cards for patients and their caregivers. Advocates highlighted the most desperate patients to persuade the legislature to bump that up to six plants and 24 ounces. Then they complained that one extra card for a caregiver to grow for a patient wasn’t enough, so a third card for growers was added as well.

The common theme connecting these requests for increased limits and a grower’s card was the lack of access to marijuana for patients, because Oregon had no dispensary system. But then an ad hoc system of dispensaries began popping up anyway, selling marijuana to patients despite the illegality of doing so, winking and nudging with explanations of “donations” and “reimbursements for supplies and utilities.” Recognizing the futility of stopping it, the legislature in 2013 codified those dispensaries into law.

We’re supposed to believe that if we’d have had two successive legalization failures in Oregon, Salem would have just left this medical marijuana program alone?

(Coming up in Part Three, how Washington followed a similar path and got its medical program restricted worse than Oregon’s.)