What Does New Drug Czar Botticelli Think About Marijuana Legalization? 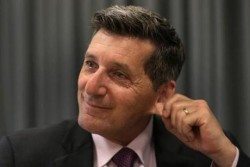 The leader of the anti-legalization group Project SAM, Kevin Sabet, sat down for an interview with the newly-confirmed head of the Office of National Drug Control Policy (a.k.a. “the drug czar”), Michael Botticelli.  In the interview, we learn that (surprise!) the drug czar opposes marijuana legalization (as he is statutorily required to do) and thinks medical marijuana and marijuana legalization have taught the children that marijuana is harmless and fun to consume.  Some relevant excerpts from Botticelli’s answers follow, with my reactions:

BOTTICELLI: Just to be clear, this administration, this office, is opposed to legalization. This is not from an ideological perspective. When you look at the research, the science, and the data behind the health harms of marijuana, particularly as it relates to youth in this country, I think we have some real challenges and hurdles facing us.

That’s strange, I was just reading this piece in the Washington Post entitled “Marijuana may be even safer than previously thought, researchers say“.  The piece details the latest research on marijuana’s harm relative to other drugs and concludes “We should stop fighting marijuana legalization and focus on alcohol and tobacco instead.”  It goes on to note that marijuana is 114 times safer than alcohol.  Alcohol actually turned up as the most dangerous recreational drug, riskier than heroin, cocaine, ecstasy, and meth.  According to the Centers for Disease Control, underaged drinking kills around 4,300 children and teens every year.  While there have been cases of children accidentally consuming marijuana, there has not been one single death due to marijuana overdose in all human history.

BOTTICELLI: The American Academy of Pediatrics… said that for any policy position, the most salient criteria should be what its impact is on youth in this country. That I think is where the basis of our policy comes from.

I see.  So, those 4,300 deaths from teen drinking must greatly inform the drug czar’s policies.  Since marijuana kills zero and the drug czar wants to keep its possession criminal, the drug czar’s position on alcohol must be somewhere from life in prison to death penalty for any adult who possesses alcohol.  Oh, no, wait, I’m told that the drug czar doesn’t take a position on alcohol prohibition, since that’s not a drug of abuse listed on the Controlled Substances schedule.  That drug we can sell in supermarkets where kids can touch it; that drug we can consume on outdoor public patios where kids can see it; that drug we can celebrate at dinners, at parties, at sporting events, at concerts, at festivals, and in public whether or not kids are around.  It’s marijuana, the one that kills nobody, that we need to lock people up for.

BOTTICELLI: …if you think of what Big Tobacco did, they said, “Our product is helpful. It relaxes you. It makes you feel better.” They had physicians promoting it. They used very funny cartoon characters to market their products and they refused to reveal the ingredients of their products. And I think you can begin to see that the exact same things that we had to undo with the tobacco industry are now happening with the commercialization of marijuana.

But Big Marijuana doesn’t have to lie about its product.  It really does help with stress, nausea, sleeplessness, mood, pain, anxiety, appetite, and many other conditions.  It’s a pleasant experience for most adults who try it.  And in the jurisdictions that have legalized it, a very careful inspection of the product is conducted with informative labeling on the package a statutory requirement.  It’s only the black market marijuana that’s sold with mystery ingredients.

(Tomorrow: The Drug Czar on Marijuana Legalization vs. Addiction Recovery)