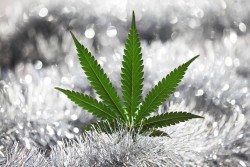 On December 17th, members young and old of the Confederated Tribes of the Warm Springs reservation voted overwhelmingly to proceed with a new commercial venture in recreational cannabis. Nearly 9 out of 10 tribal members said yes. But, in what might be described fairly as a travesty, while the tribe’s business office says yes, tribal government will still demand its members just say no.

Turns out that while the tribal commercial arm will build a 30,000 square foot indoor farm and sell tribal cannabis at stores around Oregon, pot will remain illegal to possess and consume on tribal property, for tribal members and visitors alike. In what seems like a perfect example of the kind of nearsighted policy-making that thinkers like Dr. Michelle Alexander have warned about, it appears that the Warm Springs Tribe, cynically or out of misguided intention, is screwing over the people who were most harmed by prohibition.

Now, it can never be over-repeated that Native American tribes have experienced a holocaust in this country, one without end. They have been so fucked over by the states and the feds alike for so long that any opportunity to rebuild should be celebrated, especially one as promising as cannabis. Certainly if casinos provided a lifeline at great social costs, cannabis offers a more positive and sustainable path to prosperity. And yes, with unemployment on the Warm Springs reservation ranging anywhere from nearly 20% according to the state of Oregon + 70% according to tribal estimates, a booming pot biz could have a wonderful impact on tribal unemployment and that is incredibly important in addressing all sorts of ills.

That said, what the leaders of the Confederated tribes have done is find a truly ironic way to punish their own members while also denying their tribe the opportunities to leverage cannabis to tackle the biggest challenges facing their community. It is well known that levels of alcohol abuse and addiction are higher in Native communities, possibly double the national average. And alcohol fuels domestic violence and crime on tribal lands, driving up trauma and PTSD rates and exhausting tribal law enforcement resources. So maybe the tribe’s leaders would want to know about emerging science showing how cannabis therapy is being used to treat alcoholism. Ditto PTSD. Etc.
It would be interesting to know how many tribal members really understood the specifics of the deal they were voting for. How many members knew that prohibition would remain in place even as the tribe moved ahead commercially? How much public involvement and outreach education happened in the lead up to the vote? (When I did a search on the Warm Springs website for either the word cannabis or the word marijuana, not a single result came out anywhere on the site.)

No one need envy the challenges of running a tribe. It sounds hellish. No doubt the Tribe’s elders and advisors carved out a Faustian bargain with investors, feds, and others, going long on big promises of revenue by cashing in the stubbornly fading loyalties to a failed drug war. My only hope is that wiser hearts and heads prevail before it is too late to change course.

Known affectionately as a "one-eyed fool" Jack Rio is an experienced player in Oregon politics.