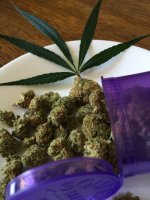 Maui Grown Therapies and Oahu’s Aloha Green Apothecary are the only two medical cannabis dispensaries legally operating under Hawaiian law, both first opening their doors in August. Like many states working out the kinks of a newly established dispensary system, bureaucratic hurdles hindered the Hawaiian dispensaries initially, but their state government seems to be looking for solutions to assist state-regulated dispensaries, including establishing a cashless system that can alleviate some of the problems associated with a lack of access to banking services, an issue plaguing cannabis businesses across the country, and the world. Despite the problems associated of opening up a new business, let alone a federally illegal one, the Hawaii’s only two dispensaries generated over $426,000 in sales.

According to data for the state Department of Health, the dispensaries sold 8,890 products and had a combined 7,845 customer visits.

In its presentation to the legislative oversight group for medical cannabis on Wednesday, the DOH said on average, customers bought 3.3 grams and spent $54.33 per purchase.

The department also said there were more than 18,600 registered patients as of August, which represents an increase of 615 from the month before.

Fortunately, registered patients in Hawaii now have better access to medical marijuana. Unfortunately, the average price of a gram is $16.45, too much of a price for many patients, especially those on a fixed income. As more dispensaries come online, the price should start dropping for patients. However, demand will increase as more patients get registered with the program, as expected, and when Hawaii starts allowing state-licensed patients from across the nation utilize Hawaiian dispensaries.

Hawaii’s medical cannabis dispensary system will only grow over the coming years and we can expect the Aloha State to legalize for all adults within a few years, becoming one of the first states to end prohibition thru its state legislature. As Hawaii’s cannabis system expands, hopefully the state can learn from the successes of others, as well as look for ways to improve upon what other locales have done.

For instance it would be great to see Hawaii, or any  state, implement policies to ensure all patients have safe access to a safe medicine, such as a establishing a program to assist patients battling poverty. I look forward to learning more about Hawaii’s system, networking, and sharing ideas with business owners, investors, and activists at the upcoming International Cannabis Business Conference in Kauai at the beginning of December, just one month before the state is expected to start accepting the medical cards from other states and California begins full legalization for all adults. While many hurdles remain for Hawaii, and the global cannabis legalization movement, it is clear that we have the momentum and are seeing great progress state by state, country by country.