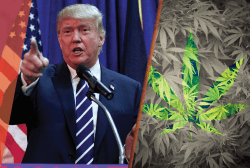 The first shoe to drop was the announcement that, as predicted here, Attorney General Jeff Sessions has ripped up the Cole Memo protecting state legal marijuana operations. The second shoe dropped when asked about this radical change, White House Spokesperson Sarah Sanders asserted, “We have to enforce federal law.”

The readiness by the White House spokesperson for the question and her quick answer are ominous. There was no mention of state’s rights or medical benefits, just the stark statement:

Such a quick and powerful endorsement of Jeff Session’s actions seem to indicate support by the president, a big negative for those who believed Trump’s support for medical cannabis and state’s rights during the campaign. The AG’s green light to his 94 federal prosecutors and their 5,000 assistant prosecutors threatens the lives, livelihoods, and freedoms of millions of Americans citizens.

Mr. Sessions is out of touch. I think he is trapped in time.

The only exceptions to the negative reaction came from some police groups and anti-marijuana organizations such as SAM. Ominously, some (though not all) US Attorneys to whom the new policy was directed who are now freed and incentivized for marijuana prosecutions, were big supporters of the DOJ change.

Another worry is the recent stuffing of 17 vacant US Attorneys by Jeff Sessions. Trump fired 46 US Attorneys in March and has not acted on replacing many of them. Jeff Sessions has just stepped in and appointed 17 of these prosectors on an interim basis, free to choose those who echo his bias against marijuana.

The Los Angeles Times just analyzed many of these prosecutors for hints about possible marijuana enforcement.

The President actually tripled down on marijuana enforcement with his statement from Camp David. Although he did not mention cannabis specifically, he lumped in in with “traditional drugs” which he contrasted from opioids. Bizarrely, Trump seemed to downplay the fact that most of the deaths he refers to come from the new, pharma-driven opioid epidemic. Remember, sir, you created a commission, headed by Chris Christie.

Standing in front of a group of hard-core marijuana haters, also known as the 2018 Republican Agenda planning group, Trump expounded,

Whether it is opioid or traditional drugs. It’s never been like it is.

As Sarah Mezah reported in Newsweek, President Trump Says Countries That Had Success Dealing With Drugs Chose To Be ‘Very Harsh.’ Trump’s tone, expounding harshess, is omious and chilling.  More on this soon.