The Arrogance of Oregon Politicians on Marijuana 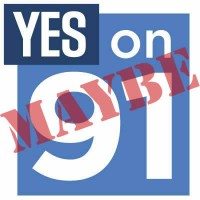 What good is a democracy if what the people vote for is ignored?

It’s a question I’ve been pondering since Oregon passed its marijuana legalization initiative, Measure 91, with the greatest margin of support for any state that has legalized marijuana, 56.1 percent.  More Oregonians voted for legalized marijuana than voted for any statewide official.  Now, the legislature seeks to undo much of what the people approved as the legalization regulations are written.

The story begins with the previous general election in 2012.  Measure 80, known as the Oregon Cannabis Tax Act or OCTA, had made the ballot, but went to down to defeat at the same time Washington and Colorado were passing their historic marijuana legalization laws.

The major newspapers had mostly come out against OCTA.  They cited numerous flaws with the proposal, such as allowing for unlimited personal possession and cultivation and establishing a centralized marijuana commission selected by marijuana growers that would control the wholesale purchase and pricing of all marijuana in Oregon.  When OCTA lost as Washington and Colorado won, political observers explained that the wise electorate had resisted their inclination to legalize marijuana because the details of this particular legalization plan were unwise and unworkable.

But the strong showing for legalization in Washington and Colorado lent an air of inevitability to eventual legalization in Oregon, if not in the 2014 midterm election then certainly during the 2016 presidential election year.  That’s when organizers of what would become Measure 91 began engaging the legislature with their ideas of how legalization should unfold in Oregon.

The legislature refused the offer, so New Approach followed through on its promise.  New Approach gathered the requisite number of signatures, the measure made the ballot, and it passed overwhelmingly.  Fifty-six percent of the voters agreed that on July 1, adults get to possess 1 ounce of marijuana, 16 ounces of edibles, 72 ounces of tinctures, and 1 ounce of concentrates.  Oregonians decided that adults also get to possess 8 ounces of marijuana and cultivate 4 marijuana plants per household.  The electorate mandated that only the state can tax marijuana at a low $35 per ounce and only a vote of the people can ban marijuana commerce in a city or county.  Most importantly, the will of the people is that the existing medical marijuana program is not to be affected by passing legalization – Measure 91 made that point in three separate sections (Section 4.7, Section 6.2a, and Section 6.2b).

Now the legislature is suddenly very interested in writing the details of marijuana legalization.  When Washington State passed their Initiative 502, it was safe from legislative tampering for two years, thanks to that state’s constitutional requirement of a two-thirds legislative majority to override an initiative passed by the people.  Colorado’s Amendment 64 is in that state’s constitution, and thus can’t be changed without another constitutional amendment.  But since Oregon’s Measure 91 is neither constitutionally protected nor a constitutional amendment, it is immediately subject to the regulation and amendment that can be passed within the House and Senate.  The legislative disdain for the clear intent of the people reached all the way to the governor’s office as well.

Before he resigned due to an influence scandal involving his fiancée, former governor Kitzhaber was announcing his set of “principles” that should guide the implementation of Measure 91.  “The amount that you can actually grow at a home-grow operation,” Kitzhaber told the Bend Bulletin, “seems to me to exceed the amount that you’re supposed to be able to have legally.”  Kitzhaber seemed to be thinking that four plants would produce more than eight ounces, which may be true.  But I doubt Kitzhaber was arguing that the home possession limit should be higher; rather, he was arguing that there should be fewer plants allowed than what was approved by 115,000 more voters than re-elected him.

The former governor was also quick to ignore the people on leaving the medical marijuana program untouched, asking “If you could use marijuana recreationally, why do you even need a separate medical marijuana statute?”  That’s a refrain picked up on by members of the legislature who are floating various bills that would in some way merge medical with recreational or eliminate major parts of the medical law altogether (some of those bills, sadly, are proposed by medical marijuana growers seeking greater profits and less responsibility to care for patients).

The lobbyists for the cities and counties, meanwhile, are fighting to allow localities to set their own marijuana taxes, clearly counter to Measure 91’s vesting of sole taxation authority with the state.  The cities are arguing for the legislature to let stand local taxes they passed prior to the election, despite Measure 91’s clear language repealing and superseding all inconsistent local laws.  Those cities and counties also want to be able to ban all marijuana commerce through their councils and boards, rather than through Measure 91’s required vote of the people.  One legislator even floated the idea of increasing Measure 91’s typical 1,000-foot buffer between commercial marijuana operations and schools to an entire mile, which would make marijuana commerce impossible in just about every city and town in Oregon.

So now the New Approach Oregon campaign is tasked with insuring that what the people voted for actually becomes the law.  As the legislature sees it, in 2012, voters who craved legalization were apparently smart enough to reject the details of OCTA, but in 2014, voters were apparently ignoring the details of New Approach Oregon because they simply craved legalization.