After Supreme Court Refuses to Hear Suit Against Colorado, Nebraska and Oklahoma Should Save Taxpayer Dollars 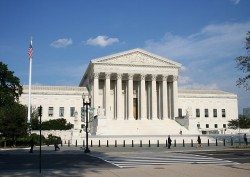 The cannabis community rejoiced today, learning that the United States Supreme Court had rejected to directly consider a lawsuit brought by the attorneys general in Nebraska and Oklahoma against the state of Colorado for legalizing cannabis commerce. Nebraska and Oklahoma hoped to show direct harm with a suit directly to the highest court in the land, an action allowed for interstate disputes.

The Supreme Court declined to hear the case directly, with only conservative justices Clarence Thomas and Samuel Alito signing onto a dissent. Nebraska and Colorado can now seek relief in district court and fight a lengthy and costly court battle, hoping that the case could eventually be taken up by the Supreme Court and somehow eking out a decision that forces Colorado to shut down the regulated production and sale of marijuana, as approved by a majority of their voters. If successful, marijuana would be legal to grow and possess in Colorado, but no regulated sales would be allowed, pushing cannabis commerce into the illegal market, a policy contrary to virtually all citizens.

Marijuana Majority’s Tom Angell, as usual, was on top of the case and was quoted in The Washington Times:

“The justices correctly decided that this lawsuit is without merit and that states should be able to move forward with implementing voter-approved legalization laws even if their neighbors don’t like it,” Mr. Angell said.

He said if neighboring states are finding problems with Colorado’s policy, the easiest solution is to follow Colorado’s lead and legalize marijuana themselves.

“That will allow their criminal justice systems to focus on real crime, and it will generate revenue that can be used to pay for health care, education and public safety programs,” he said.

Continuing to push this case forward will likely only waste taxpayer dollars. Not only with the citizens of Nebraska and Oklahoma have to foot the bill for their attorneys general tilting at windmills, but the taxpayers of Colorado have to pay to defend their voter-improved law, and all U.S. taxpayers chip in to pay federal court costs. Even if Nebraska and Oklahoma were to win the lawsuit, they would most likely only exacerbate the flow of marijuana across state borders as pulling a regulated system out from under marijuana growers could lead to them seeking new markets in other states.

In addition to wasting taxpayer dollars, the Oklahoma and Nebraska attorneys general are betraying their conservative belief of states’ rights and, if successful, they could have unintended consequences that could harm many conservative policies, such as gun rights. For instance, both Colorado and Oregon require background checks for the private sale of firearms, while Oklahoma doesn’t require any background check on private gun sales while Nebraska doesn’t require a background check on the private sale of long guns. Does Oklahoma and Nebraska want other states to challenge their gun laws, arguing that unlicensed sales easily allow guns to get into the hands of those federally prohibited from legally possessing guns, such as felons and domestic abusers? This is a slippery slope that the attorneys general in Oklahoma and Nebraska need to consider.

“This is not about marijuana at its core,” he said in a press release. “It is about the U.S. Constitution, the Tenth Amendment, and the right of states to govern themselves as they see fit. If the Supreme Court can force Colorado to criminalize a substance or activity and commandeer state resources to enforce extra-constitutional federal statutes and UN agreements, then it can essentially do anything, and states become mere administrative units for Washington, D.C….If the people of Colorado want to end prohibition of marijuana, while I may personally disagree with the decision, constitutionally speaking, they are entitled to do so.”

Today’s court ruling is not only a victory for the cannabis community and the will of Colorado voters, but also for the 10th Amendment, the basis for a states’ rights doctrine that conservatives are supposed to hold dear. It is time for Scott Pruitt and Jon Bruning to stop wasting the time, resources and money of United States taxpayers. State officials and voters in Oklahoma and Nebraska should demand that their attorneys general get back to work on real issues facing their states and end this quixotic legal venture that won’t accomplish any stated goals and is ultimately a betrayal of their own conservative principles.